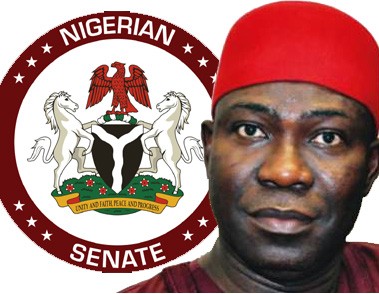 Come out, take your rightful positions in governance, Ekweremadu tells Nigerian Youth
AHEAD of 2019 Presidential and general elections, deputy Senate President, Senator Ike Ekweremadu, yesterday gave the Nigerian youth, a matching order to step out to take their rightful positions in governance and national development as well as to remain focused in realizing their goals and never lose self-confidence. Ekweremadu Ekweremadu also gave insight into why the National Assembly passed the constitution amendment bill, which sought to reduce the age qualification for various political offices in order to give the Nigerian youth their rightful place in the political leadership of the country. Ekweramadu spoke in Enugu on Friday while addressing the 7th Enugu State Annual Youth Summit. The Senator, who cited so many examples of both Nigerian and foreign leaders, who became very politically relevant early in life, also took the youth on a brief tour of his personal history, including the civil war experience, and political huddles he had faced, assuring them that “if I could succeed, you too can succeed”. He urged the youth to step out to take their rightful place in governance and national development and to remain focused on their goals and never lose self-confidence. He said: “The Nigerian youth have demonstrated their industry, intellect, creativity, resilience, energy, ingenuity, and entrepreneurial prowess and deserve the chance to assume leadership positions at all levels of governance. “It is for the above reasons that the National Assembly agreed that the youth deserved a better deal and bigger role in the governance and development of the country. We readily bought into the Not Too Young To Run project to enlarge the political opportunities for the youth. “We altered Sections 65, 106, 131, and 177 of the Constitution to reduce the age qualification for the office of the President, House of Representatives, and State Assembly”. He said although the amendment would only come into effect if assented to by the President, he was very positive that the President would assent to the amendment. “If you are old enough to vote, it is only natural that you should be old enough to be voted for”, he emphasised.
Share
Facebook
Twitter
WhatsApp
Pinterest
Linkedin
ReddIt
Email
Print
Tumblr
Telegram
Mix
VK
Digg
LINE
Viber
Naver
Previous articleINEC suggests candidates should be subjected to debate for 2019 Election
Next articleWill Obasanjo and Buhari will never be cool friends again?