Clinton calls 2016 election ‘traumatic,’ admits she’d like to ‘take back’ some things she said 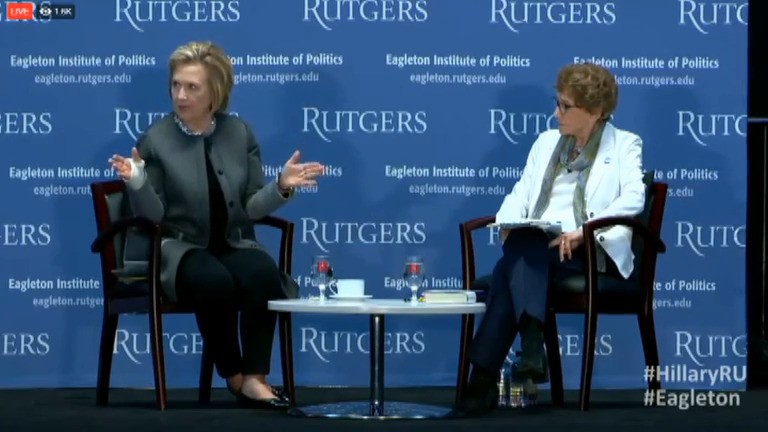 Clinton calls 2016 election ‘traumatic,’ admits she’d like to ‘take back’ some things she said

Almost a year and a half since losing her bid for president, former Democratic nominee Hillary Clinton still is talking about election woes, calling it a “traumatic” experience.

Speaking at Rutgers University Thursday, Clinton spoke primarily about being a woman in politics — and being targeted as a result, the problem Republicans face as a disjointed unit, the upcoming elections and her hopes that the recent events under the Trump administration would motivate people enough to vote for change.

When asked about being told to get off the public stage and “shut up,” Clinton said she was “struck” by the fact that “they never said that to any man,” citing unsourced research from “one of the young people” on her staff.

Clinton also mentioned being called “shrill” by the media, which she said never commented on her opponent’s habit of “finger waving.”

The former secretary of state also said she’s regretted some things she said.

“I can do better. There are things I’ve said I’d like to take back.” She might have been referring to remarks she made earlier this month in India where she said women face “ongoing pressure to vote the way that your husband” thinks they should. Critics slammed the comments as sexist.

She made similar remarks in September, seemingly blaming women in part for her loss.

Clinton agreed to do Thursday’s speech for $25,000 from a university endowment, NJ.com reported.

Clinton also took the opportunity to bash the Republican Party saying it slowly was coming undone by “a very small group of powerful forces,” who could fund another candidate if one does not appeal to the “far right.” She said she was referring to groups including the National Rifle Association.

Clinton talked about the upcoming elections and the number of Republicans who have announced their retirement or that have said that they will not seek reelection. “They’re leaving,” she said, “because they know they will be shown no understanding by the hard right and the money that funds it.”

Clinton also took jabs at the Trump administration ahead of the important 2018 midterm elections, although she mentioned Donald Trump by name only once, but alluded to him several other times.

“I really hope this is a turning point,” she said, speaking of the upcoming midterm elections.

“I’m hoping in this election, this midterm election, enough people will, maybe for the first time or maybe for the first time in a long time say, ‘Look, I was really moved by what happened at Parkland, or I’m sick we’re the only country in the world not in the Paris agreement on climate change, or I don’t like what they tried to do to healthcare’ or whatever the motivator is” to ensure enough people will go out to vote.

Clinton spoke to a crowd of just over 5,000 people.