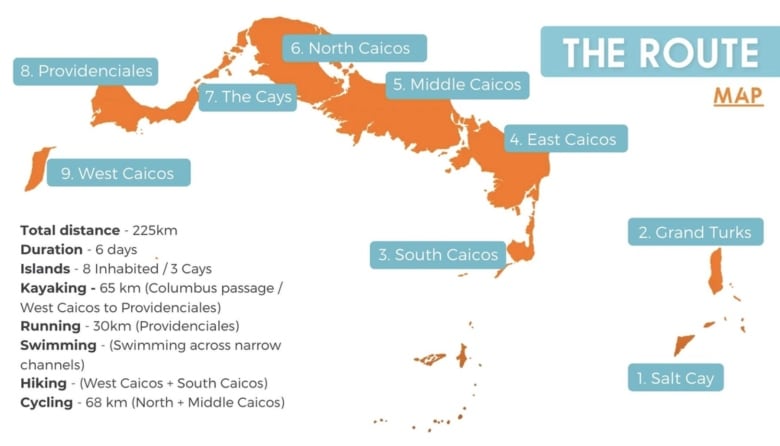 Now, the Canadian-Turks and Caicos Islander is returning home to paddle, run, hike, cycle and swim across the eight main islands that make up the Turks and Caicos archipelago. If he succeeds, he’ll be the first known person to make the crossing.

The six-day expedition scheduled for the end of April will rival the difficulty of his past feats, Rigby said. The mission will be gruelling, but it’s also a sentimental one that will connect him to his roots.

“I get to go back home and enjoy traversing and learning more about the home I was born in,” he said. “So there’s a sense of glory and pride [with this expedition].”

Turks and Caicos is a British overseas territory made up of more than 40 coral islands, but Rigby will explore the major eight — Salt Cay, Grand Turk, South Caicos, East Caicos, Middle Caicos, North Caicos, Providenciales and West Caicos, as well as three cays along the way.

The Royal Canadian Geographical Society Fellow will spend two weeks on Providenciales acclimatizing and completing his training before embarking on the Caicos Challenge.

What to expect on the open Atlantic

Each leg of the expedition poses its own unique challenges. However, kayaking across the Columbus Passage — the turbulent channel that divides his birthplace of Grand Turk and the island of Salt Cay from the other main islands — is likely to be the toughest.

The passage is around 40 kilometres wide and reaches depths of more than 6,000 feet. It’s notorious for surface conditions that can change from manageable to extreme in a matter of minutes.

“Some folks are afraid to travel [the passage] in a boat, so imagine doing that in a kayak,” said Jarret Forbes, Director of the Turks & Caicos Sports Commission, a body which governs sporting activities in the territory.

No one in recorded history has accomplished a human-powered crossing. Rigby would be the first if he can successfully weather the large swells and scorching, shadeless heat that awaits him on the open water.

“Weather can be sporadic, especially out on open Atlantic water,” Rigby said. “Within 10 minutes, the waves can grow by 10 metres.”

But he’s no stranger to crossing large bodies of water for days on end. Rigby spent two months kayaking the length of Lake Malawi in Tanzania, the third largest lake on the continent measuring 550 km in length.

Toronto-based explorer Mario Rigby talks about his training program for the Caicos Challenge, in which he’ll run, hike, bike, swim and cycle across the Turks & Caicos Islands. (Mario Rigby). 1:49

For the Caicos Challenge, he’s focused on building endurance through what he calls a “be ready for the world” training program.

The program involves training in notably colder temperatures than those he’ll encounter in Turks & Caicos. The former track and field athlete is completing part of his sport conditioning program in Ontario’s Bruce Peninsula National Park.

“For me, it’s more about getting your feet moving and not giving excuses,” Rigby said about dealing with a more than 25-degree temperature difference for training.

He added that he’s never faltered in thinking bigger with his expeditions because there’s no room for excuses at that level of athleticism.

“That’s kind of what stifles people from doing these grander expeditions … My lungs need to open up and become stronger, and that’s what I’m trying to do.”

Rigby’s adulthood was largely spent in Canada after moving to Toronto at 16, but it was his childhood on the territory’s capital island of Grand Turk that forged his passion for exploration — cloudless days spent with his younger brother and friends exploring the diverse terrain.

That’s why, he said, he wanted to go somewhere that felt like home for his next big expedition.

“It’s essentially [an opportunity] for me to go back to being a kid exploring my islands,” he said. “Except now I get to do it in a really cool way where I get to advocate for sustainable development.”

The 21st-century explorer, who has attracted big-name sponsors like Arc’teryx for the mission, is big on social responsibility. In 2018, he spoke about climate change and clean energy at the United Nations and was recognized by a UN initiative, MIPAD, as one of the Top 100 Most Influential People of African Descent.

Mario Rigby kayaked the entire length of Lake Ontario this summer, starting his journey in Hamilton and concluding it recently in the Thousand Islands. Kelda Yuen spoke to him about what this achievement meant to him — and the message he hopes it sends. 2:42

For this mission, he’s planning to advocate for the 547-km long barrier reef system that protects the archipelago’s low-lying islands from waves and storms that could worsen with climate change. Funds raised from the expedition will support the Turks and Caicos Reef Fund’s education initiatives and free swimming lessons for local youth.

But another important focus for him is inspiring his community. Rigby formerly competed in the 200- and 400-metre sprints internationally for Turks and Caicos before he retired from track to become a personal trainer in Toronto.

For young people, both in Turks and Caicos and internationally, he’s long been an inspiration in sport. For adults, he gives athletes a glimpse of what it means to push boundaries after a career in professional sport.

“Mario encourages young athletes to take risks and to push themselves to a limit they didn’t think was possible. He represents long-term fitness,” Forbes said.

“Oftentimes, we think that being an athlete ends at 25 or 26, and for professional athletes you might go as far as 35. But his fitness goals inspire adults to keep training and keep taking on new challenges in sport.”