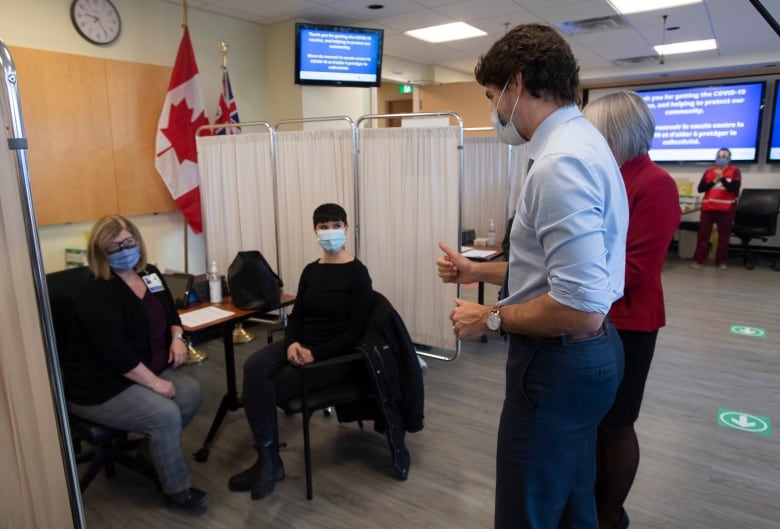 Prime Minister Justin Trudeau announced today that the government will buy three million more vaccine shots from Pfizer than originally planned — an effort to secure more of the product that has become the backbone of Canada’s immunization campaign.

The National Advisory Committee on Immunization recently revised its guidelines to permit some recipients of the AstraZeneca vaccine to opt for a second dose of the Pfizer product. To meet increasing demand for Pfizer’s product, the federal government has ordered an additional three million doses, due to arrive in September.

That means Canada is on track to receive 51 million doses of Pfizer this year — enough to fully vaccinate 25.5 million people.

Trudeau said Canada will receive more than two million Pfizer doses each week until the end of August. Nine million doses are to arrive in July and 9.1 million are expected in August — supply that should ensure Canada meets the goal of completely vaccinating all Canadians who want a shot by the end of September.

The earlier and more substantial Pfizer deliveries will fill a gap left by Moderna, which has proven to be a less reliable vaccine supplier. That Massachusetts-based vaccine maker has struggled with product issues at its plants in Europe and has repeatedly revised or punted delivery dates.

Canada has received 5.7 million doses from Moderna but the company’s shipments have been spotty or smaller than expected since April 1. Moderna has delivered or scheduled less than half of the 12.3 million doses initially promised for the second quarter.

“We’ll keep getting shipments secured until everyone can get their shots,” Trudeau said. “At the pace we’re going, that target is well within reach.”

With 25 million doses administered so far, 65 per cent of all eligible Canadians — people 12 years of age and over — have received at least one dose of a COVID-19 vaccine.

But few Canadians have gotten their second doses. Just 6.5 per cent of the population is fully vaccinated.

“The more people are vaccinated, the safer we all are and the closer we all get to being through this crisis,” Trudeau said. “You can be hopeful about this summer and fall. Let’s start looking forward to more of what we love, from camping to dinner with friends.”

Anita Anand, Canada’s procurement minister, says Pfizer has provided the rest of its delivery schedule to the federal government. 1:34

The numbers are off significantly from the mid-April peak, with 73 per cent fewer cases being reported daily. An average of 2,300 new infections are now being reported each day nationwide, down from 9,000 at the peak.

There are also 47 per cent fewer people in hospital with COVID-19 now than there were six weeks ago. The number of ICU admissions has dropped 31 per cent from April.

Tam said that while most vaccine recipients already have received their appointments for second doses, she urged Canadians to check with local public health officials about getting earlier appointments, given the recent increase in vaccine supply.

“Getting that second dose is important not only for your own protection but for building immunity in your community. This is a win-win,” she said.