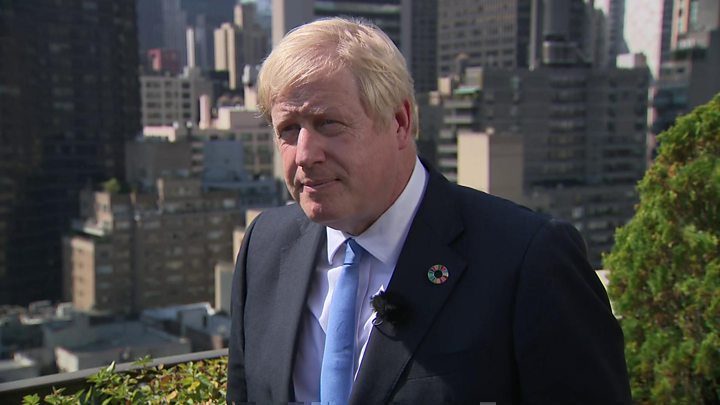 A move to refer Boris Johnson to the police watchdog is “a politically motivated attack”, a senior government source has said.

The watchdog will decide whether or not to investigate the prime minister for a potential criminal offence of misconduct in public office while he was London mayor.

It is alleged businesswoman Jennifer Arcuri received favourable treatment due to her friendship with Mr Johnson.

Mr Johnson has denied any impropriety.

He was referred to the Independent Office for Police Conduct (IOPC) on Friday by the Greater London Authority’s monitoring officer – whose job it is to oversee the conduct of the mayor and other members.

They refer to claims that Ms Arcuri joined trade missions led by Mr Johnson when he was mayor of London and that her company received several thousand pounds in sponsorship grants.

A senior government source said the timing of the referral, coming days before the start of the Conservative Party conference, was “overtly political”.

Environment Secretary Theresa Villiers said the issue had been “blown out of all proportion” and the complaint against Mr Johnson was “politically motivated”.

However, Labour leader Jeremy Corbyn rejected the claim, saying the monitoring officer had made a “wholly independent assessment” and decided there were “serious questions to answer”.

The GLA’s monitoring officer said it had referred the PM to the IOPC “so it can assess whether or not it is necessary to investigate the former mayor of London for the criminal offence of misconduct in public office”.

It said it had recorded a “conduct matter” against Mr Johnson, which happens when there is information that indicates a criminal offence may have been committed.

But it does not mean that a criminal offence is proved in any way, the monitoring officer added.

The reason the IOPC is involved is because the role of the mayor of London is also London’s police and crime commissioner.

The IOPC deals with complaints against police forces in England and Wales.

In a letter to Mr Johnson setting out the referral, the monitoring officer said it related to his time as London mayor between 2008 to 2016.

“During this time it has been brought to my attention that you maintained a friendship with Ms Jennifer Arcuri and as a result of that friendship allowed Ms Arcuri to participate in trade missions and receive sponsorship monies in circumstances when she and her companies could not have expected otherwise to receive those benefits,” it said.

Responding to the referral, No 10 said: “The prime minister, as Mayor of London, did a huge amount of work when selling our capital city around the world, beating the drum for London and the UK.

“Everything was done with propriety and in the normal way.”

A senior government source said “no evidence of any allegations” had been provided by the monitoring officer , nor was the prime minister given an opportunity to respond before a press release was published on Friday night.

“The public and media will rightly see through such a nakedly political put-up job,” the source added.

“I do feel this is a distraction and it is people seeking to use the complaints process in a highly political way,” the environment secretary added.

The BBC has now spoken to several people who went on the overseas “trade missions” with Boris Johnson to Malaysia and Singapore, to New York, and to Tel Aviv.

They said that Jennifer Arcuri seemed a bit out of place on the trips, as her companies were much less substantial than those of the other participants,

Jennifer Arcuri was originally turned down for the trip to Malaysia and Singapore, but then re-applied using a different company and was accepted.

She was told her companies were not relevant for the trip to New York, but she went under her own steam and was allowed into some of the events.

She was also turned down for the Tel Aviv trip, but Boris Johnson’s office intervened and she was allowed to join the trade mission. She paid for her own flight, and although the organisers of the trip, London & Partners, booked a hotel for her, she settled the bill.

Earlier this week, Mr Johnson denied any wrongdoing, telling the BBC: “All I can say is I am very proud of what we did as mayor of London… particularly banging the drum for our city and country around the world.”

He added: “I can tell you that absolutely everything was done entirely in the proper way.”

On Friday, Mr Johnson said he would comply with an order from the London Assembly to explain his links to Ms Arcuri.

Separately, a junior minister, Matt Warman, has said the government has launched a “review” of the £100,000 award made in February this year to Ms Arcuri’s training company Hacker House.

But he insisted it had been an “open, transparent and competitive process”.