Ben Affleck: ‘I Don’t Have Any More Room for Failure’ After Halloween Relapse 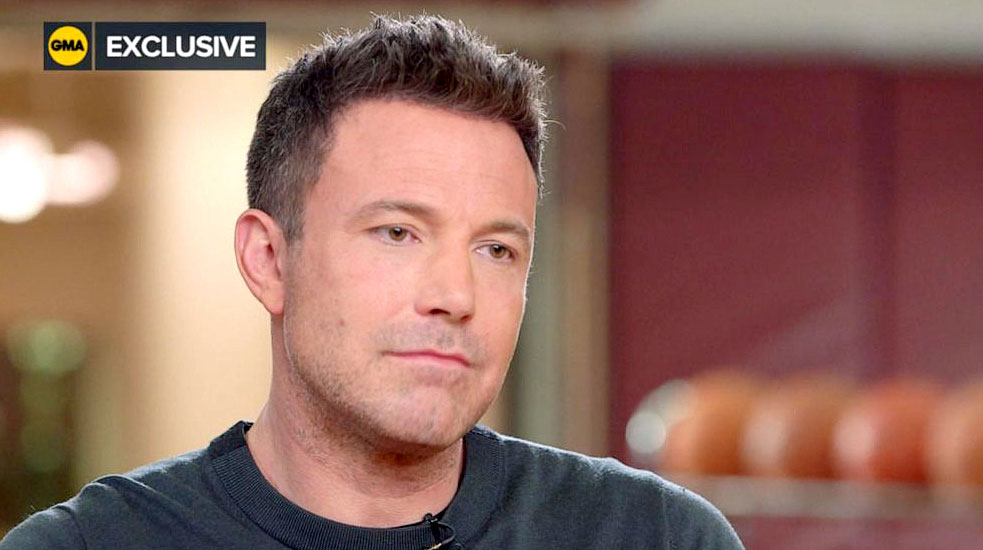 Ben Affleck: ‘I Don’t Have Any More Room for Failure’ After Halloween Relapse, Coming to terms. Ben Affleck revealed how he felt after watching footage from his relapse this past October.

Stars Who Revealed They Got Sober

“I did watch some of it, although not the whole, whole thing,” the Oscar winner, 47, said of the viral TMZ footage during Good Morning America on Thursday, February 20. “I know what it looks like to be drunk. I don’t need to watch any more of it.”

Affleck regarded the break in his sobriety as a sign he needed to get better, sharing, “I took the last half of the year off. And I just got to be dad [to my three kids Violet, 14, Seraphina, 11, and Samuel, 7]. Drive ‘em to school, pick ‘em up. Go to the swim meet That’s where the parenting happens — it’s in the cracks. It’s in the moments where you’re just takin’ them back from soccer. And they see something profound. Or they talk about how they’re really feeling about something.”

He also told GMA that he’s doing his “very, very best” to stay healthy. “I have to be the man I wanna be at this point,” he explained. “I don’t have any more room for failure of that kind.”

Affleck’s family has a history with addiction but he, himself, initially chose to get sober in 2001. After staying clean for a few years, he told GMA that he wanted to “just drink like a normal person” and he continued to do so for roughly eight years. In time, he realized how this habit had become a problem as he “started to drink more, and more, and more.” He also found it hard to “accept” that he was, in fact, an alcoholic.

The Gone Girl star, who shares his three children with ex-wife Jennifer Garner, sought treatment twice in the last three years. A few months after celebrating one year of sobriety in August 2019, he was seen stumbling out of a Halloween party while intoxicated. He owned up to the “slip” at the time, telling Daily Mail that he was “not going to let it derail” his journey to recovery.

Last month, a source told Us Weekly exclusively that Affleck has focused on “being healthy.” The insider revealed that his diet and exercise habits have been helpful in his recovery, adding, “He’s always enjoyed working out.”

Affleck will appear in a new film, The Way Back, out Friday, March 6. The sports drama follows the story of a former basketball star working toward overcoming his battle with addiction. Director Gavin O’Connor said that Affleck’s involvement in the project was a therapeutic experience for the actor, telling The New York Times on Tuesday, February 18: “I think that Ben, in an artistic way, in a deeply human way, wanted to confront his own issues through this character and heal.”

Listen on Spotify to Watch With Us to hear more about your favorite shows and for the latest TV news!