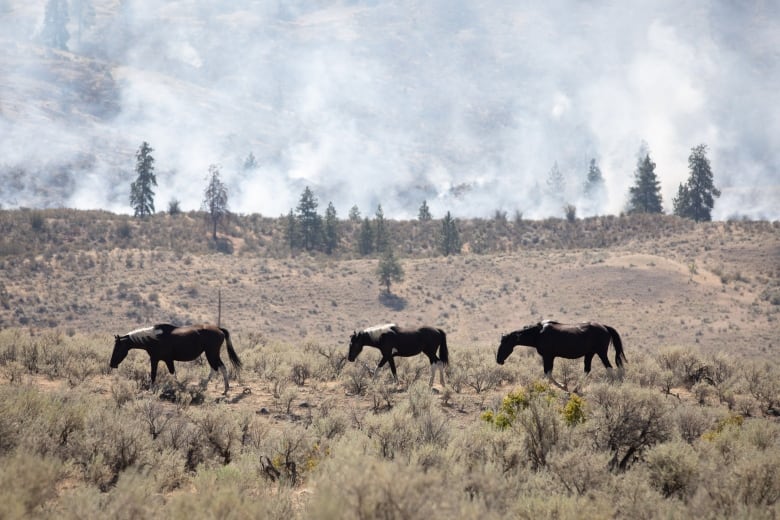 At the halfway point of B.C.’s fire season, the province is “significantly higher” than the 10-year average both in terms of the number of fires and the area burned, says an official with B.C. Wildfire Service.

There are currently 253 active wildfires burning in British Columbia, of which 38 are wildfires of note. Since April 1, 2021, the B.C. Wildfire Service has responded 1,231 wildfires, resulting in 4,250 square kilometres burned.

“The 10-year average for this time of the year is about 642 fires, or [1,050 square kilometres] burned. So obviously, we’re significantly ahead of the 10-year average,” said Rob Schweitzer, the B.C. Wildfire Service’s director of fire centre operations.

Schweitzer said there is plenty of wildfire season left, pointing out that this marked the halfway point.

“This will be a long season,” he said.

There are currently 61 evacuation orders in effect in the province, covering 3,700 properties, that require people to leave the homes immediately. A further 85 evacuation alerts, representing 18,000 properties, are in effect. Those residents must be ready to leave at a moment’s notice if an order is issued.

Emergency Info BC has a full list of reception centres.

As the fires rage, evacuees and returning residents wait anxiously to see what state their properties are in.

The Sparks Lake wildfire, burning 15 kilometres north of Kamloops Lake, is approximately 590 square kilometres in size. Priscilla Kazarian, with the Thomson Nicola Regional District, says an early aerial assessment revealed at least a dozen houses and cabins have been damaged by fire. It is still too difficult to do an on-the-ground assessment at this time. An evacuation order for 298 properties remains in effect due to that wildfire.

Schweitzer said there were several reports of individuals who are not heeding evacuation orders this past weekend. He says there were at least three incidents that required the diversion of B.C. Wildfire ground personnel and aircraft in order to rescue stranded residents.

Many residents who stayed behind are people who have lived on the land for decades and have experienced wildfire before, but Schweitzer warned this is not like the past.

“My message to them, although you’ve lived on that land for generations and a long period of time, even our seasoned firefighters are seeing behaviour and conditions that we’ve never seen before in this generation,” he said.

“The conditions that we’re seeing this year are some of the most extreme that have ever been experienced in this province.”

He urged people under evacuation orders to heed those warnings in a timely manner.

The RCMP warned that as many as four brush fires were deliberately set Saturday in the Kootenay community of Salmo, near the intersection of Highways 6 and 3 .

Fire crews were able to extinguish the fires, but officers say crews reported spotting an unknown man fleeing the area
on foot.

Three more fires were set in the same area on Monday.

“We really don’t want to be using our B.C. Wildfire resources [for] fires that appear to have been intentionally caused,” said Staff Sgt. Janelle Shoihet at a news conference Tuesday.

Shoihet said anyone with information about the fires is asked to call the Salmo RCMP or Crime Stoppers.

High temperatures are forecast at the end of the week into the weekend, with temperatures in the B.C.’s Interior reaching almost 40 C.

The silver lining is that the stable weather pattern will be helpful for overall suppression efforts, and the lack of lightning will help reduce any new fire starts, said Schweitzer.

But it will also means that the smoke will not dissipate.

Henry said it is important to plan cooling measures — like seeking air-conditioned shelter and shade, staying hydrated, and reducing activity to the cooler parts of the day.

And of the two health risks, she said staying cool should be prioritized.

“Heat is the most dangerous of what we are seeing,” Henry said. “If we are closing windows and it gets too hot in the house because of the smoke, we really need to be aware of the heat as well.”