As was his dream, police make Hunter Straight-Smith an honorary constable at his wake 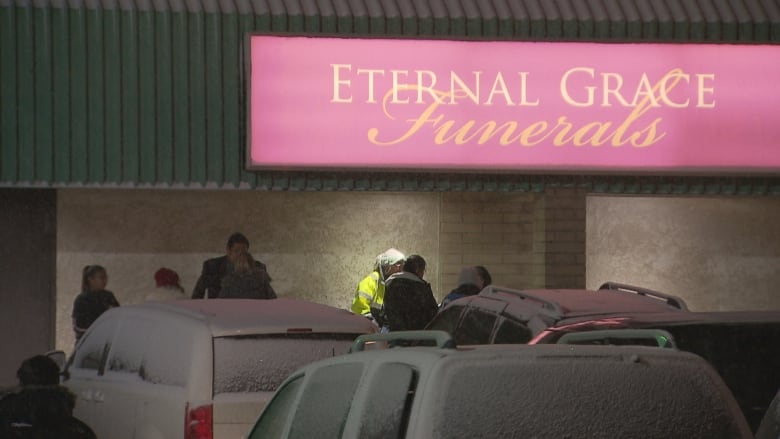 He was just three years old, but Hunter Straight-Smith already knew exactly what he wanted to do when he grew up: become a police officer.

Tragically, his life was taken long before he could see that dream become a reality.

But at a wake service Friday night, Hunter was made an honorary constable with the Winnipeg Police Service, badge and all.

Speaking at the service, Shawn Smith, an officer with the Indigenous Partnership Section of the Winnipeg Police Service, said they wanted to honor the little boy’s aspiration “to catch bad guys” after they found out about Hunter’s dream from a family friend.

“Hearing this about little Hunter, a child who vowed to be a peacekeeper, and what chasing bad guys represents, to be a good person who does what’s right, to walk an honourable path, is a testament to his character and to his spirit that we can all learn from,” Smith said.

Smith delivered two plaques to the child’s family, one with a certificate signed by Chief Danny Smyth, and one with a badge.

Hunter, who was stabbed multiple times while sleeping in his Winnipeg home, was taken off life-support and died last Saturday.

Dan Jensen, 33, was arrested last week and initially charged with attempted murder for the attack on Hunter Straight-Smith. The charges have since been upgraded to second-degree murder.

Police said on the night Hunter was stabbed, Jensen, who is not the child’s biological father, was with Smith’s mother — his on-again, off-again girlfriend — at a location on Main Street when they got into an argument that escalated into a violent assault.

From there, police believe the accused went to the home on Pritchard Avenue to see the boy.

On Friday night, dozens of friends and family gathered at a funeral home on Logan Avenue to say goodbye, to pray, and to remember the friendly, energetic little boy. His funeral will be held in Hollow Water First Nation on Monday.

As a drum circle sang a song meant to help guide Hunter’s spirit, his small, white casket sat at the front of the room. As the service went on, friends and family approached the open casket to see him for the last time.

Dozens of pictures of Hunter smiling and laughing with his family lined the lobby of the funeral home.

During the service, Father Augustine Ezedinuru asked people to honor Hunter’s memory by being kind and living in peace.

“Again, he wanted to be a policeman, to take away the bad people, so say to yourself, ‘I will not be a bad person in any way,'” he said.

“That will be a precious gift that will last.”

Ezedinuru said he knew Hunter well, sometimes giving him and his family rides between Winnipeg and their community of Hollow Water First Nation.

He, too, remembered talking to Hunter about his dream of becoming a policeman and could see, even at such a young age, that he had the discipline and strength to make his dream come true.

“He was really a policeman, because even the way he acted, the way he behaved, as little as he was, you could see that discipline in him,” he said.

Ahead of the service, Darryl Contois, who has been speaking on behalf of the family, said he wished Hunter would have been alive to see what police did for him that night. He said the gesture made the family very happy during the time of grief.

“I’m sure he’s looking down on us and saying ‘Wow, I’m a police officer.”