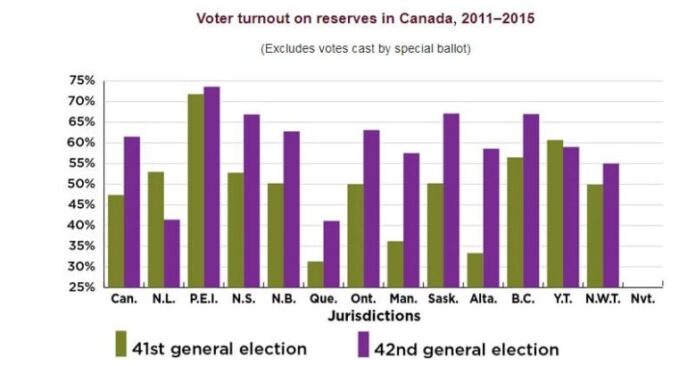 The First Nations vote might not turn out at the polls later this month in the high numbers seen at the end of the 2015 federal election, some observers say.

But 2015 seems like a long time ago for “disillusioned” First Nations voters, said Pamela Palmater, lawyer and chair of Indigenous governance at Ryerson University.

“This election presents a very different circumstance, because you have a scenario after four years that [Justin] Trudeau made a lot of promises of things he would do and he’s broken a majority of those promises,” she said.

“That has left a lot of First Nations people very disillusioned, because they really thought Trudeau meant what he said when he said he was going to do all these things.”

The Liberals and the NDP benefited the most from the large turnout of First Nations voters in 2015.

Though the NDP remained the top choice for on-reserve voters nationwide, the Liberals picked up most of the new votes in the last election, a CBC analysis found.

Naomi Sayers, an Indigenous lawyer, said those votes may not be in play this time.

“I think for this federal election a lot of people, particularly Indigenous people, are fed up. One of the reasons for engagement last time was Indigenous reconciliation,” said Sayers.

Indigenous people are not a major focus of most of the parties’ campaigns this time, Palmater said.

“Trudeau, whose original campaign was almost entirely focused on Indigenous peoples, you barely see that in his election materials at all,” she said. “You have to root through it to find little things here and there.

“There’s been a significant turn of tide with regards to Indigenous people. That said, the Conservatives and some of the other parties have not made Indigenous people a priority either. I’m thinking there’s a chance the voting may go down. You might not see the same dramatic increase in 2015 because of this disillusionment.”

Sayers said party platforms are “a strange beast” because many of the issues being discussed on the campaign trail, such as health care and climate change, are Indigenous peoples’ issues too.

“People have to start thinking of these platforms not just as Indigenous and non-Indigenous but that Indigenous issues are presented throughout,” she said.

“It sucks that there can’t be more targeted messaging to persuade particular groups, and I don’t know what that means for Indigenous voters. But we need to look at it from a different angle, that universal health care is an Indigenous issue.”

Alberta led the country in the on-reserve voting percentage in 2015.

Palmater said Alberta has the potential to lead the country in voter turnout again, as there were many Indigenous people in Alberta who helped to organize the vote in the 2015 election.

“I think they all have to up their game on Indigenous issues before the election or they risk losing the support they had or potential support they could have from new First Nation voters,” said Palmater.

Marlene Poitras, Assembly of First Nations regional chief for Alberta, said the youth vote could account for many of the First Nations votes cast in this election.

“People are more informed, people are tired of the status quo and they want change. The youth movement is picking up speed, and we’re out there supporting them in terms of protecting the environment and ensuring First Nations people are well taken care of now and in the future,” she said.

“Like many First Nations across the country, people want to see action, not just dollars, on ensuring everyone has basic necessities of life: adequate housing, access to clean drinking water, good education, good health …”

Alberta had 48,585 people living on reserve at the time of the 2015 federal election, according to Elections Canada data.

Elections Canada has been working to improve access to ballots on reserves after 2015 saw delays at some polling divisions.

In some cases, a low number of available ballots delayed voting at three First Nations, including Siksika Nation in Alberta, which is part of the Bow River riding.

“We wanted to find out from the band councils and the communities themselves what are the issues they’re facing and what can we do specifically in those locations to reduce some of the barriers to registration and voting,” she said.

More than 3.5 million voter cards have been sent out to eligible voters in Alberta.