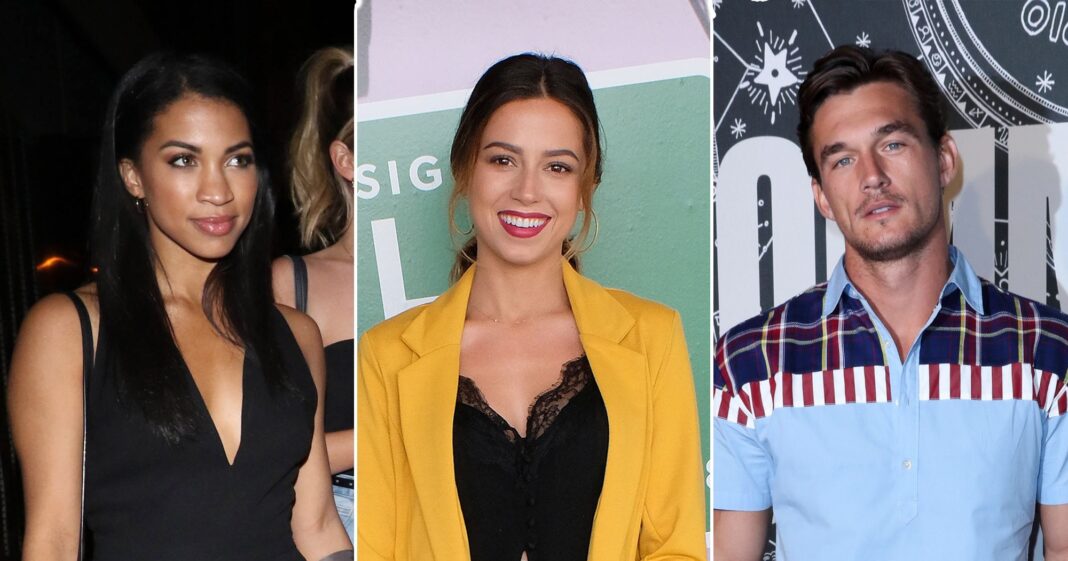 Has Tyler Cameron already moved on from Gigi Hadid? The Bachelorette star had fans wondering after he was spotted with Bachelor in Paradise alum Kristina Schulman, and now Katie Morton is offering up her thoughts on the possible new coupling.

‘Bachelor’ and ‘Bachelorette’ Stars Who Found Lasting Love After the Show

Fans began to speculate that Cameron, 26, and Schulman, 26, were dating after they were spotted having dinner at Catch in Los Angeles on Thursday, September 26.

According to Morton, 26, the outing was purely platonic.

“I think they both just went to, like a branded event. Cause like Wills [Reid] was there,” the Bachelor in Paradise star told Us Weekly exclusively at Lulus first-ever pop-up shop in Los Angeles on Friday, September 27. “Tyler is just in town. I don’t know how many people he knows in L.A., and I know Bachelor world is really small and everyone’s very welcoming, so, like, everyone’s just hanging out with each other, and getting to know each other, because we’re all going to have to be around each other. So I think it was more of that.”

She added: “I’ll clear them [rumors] up real fast! I don’t think it was a thing.”

The medical sales rep also gave an update on her relationship with Chris Bukowski. The couple got engaged on the September 17 finale of Bachelor in Paradise but, during the reunion taping, she was no longer wearing her engagement ring and spoke about their engagement in the past tense.

Morton told Us that she and the corporate sales director are now “doing great” and getting back to normal life.

Couples Who Survived the Reality TV Curse (So Far)

“It is so nice to just, like, start being able to see our families and be with our friends in public,” she told Us. “Like, that’s what I’m looking forward to most, like, being able to just, like, we both thrive in social aspects and, like, events and, like, we both thrive in our friend groups and friendships and so, like, I’m excited for us to, like, finally integrate all of them because we were in hiding for so long.”

She admitted the show “put a lot of pressure” on their relationship but “now it’s like normal life.”

“Now we can breathe and enjoy ourselves,” she added.

The Sherman Oaks, Florida, native explained that she and Bukowski, who hails from Chicago, will also be in a long-distance relationship for some time.

“Chris travels a lot and so do I and so we’re going to first try and figure out what our individual lives look like right now, because everything is so busy and hectic,” she explained to Us.

Cameron, meanwhile, revealed to Entertainment Tonight earlier this week that he was in talks to become the next Bachelor, but turned down the offer because of his relationship status. His fellow season 15 Bachelorette contestant Peter Weber scored the role instead.

“You shouldn’t go on the show if you have a girlfriend … if you’re dating somebody or seeing somebody,” he said in an interview on Tuesday, September 24.

The reality TV star was linked to Hadid after they were seen at Brooklyn’s Dumbo House in August and he accompanied her to her grandmother’s funeral in the Netherlands earlier this month. He told ET, however, that he and the 24-year-old supermodel are just friends.