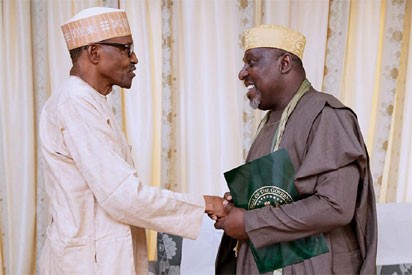 APC Congress: Rochas begs Buhari to cancel Imo results
ABUJA – CHAIRMNAN of the All Progressives Congress, APC, and governor of Imo State, Rochas Okorocha rushed to Daura, the country home of President Muhammadu Buhari in Katsina State, on Sunday to appealed to the President to intervene in the outcome of the Saturday’s party congress in Imo State. Governor Okorocha who allegedly lost out in the political intrigue and manipulation that characterized the conduct of the congresses described what happened in Imo State APC as funny politics that should be stopped. After meeting with President Buhari, Governor Okorocha who was recently accused of unilaterally shared positions in the party for the 2019 elections, in a story monitored in the Nigerian Television Authority, NTA, Sunday night said, ” we expect internal democracy and internal democracy is the way to go. Those kind of funny politics that were played must stop, where people … want to carry ballot boxes, steal results looks so primitive. I intimated Mr. President and we will make sure that such things must stop. On what was the response of President Buhari, the Imo state governor said, “He spoke like the President and he will take the necessary steps to correct this in our party APC not just in Imo State but across the whole nation, to make sure that there is respect for internal democracy in Imo State.” Chairman of Nigeria Governors Forum and Governor of Zamfara State, Abdulaziz Yari while also commenting on the outcome of the APC Ward congresses said that the exercise went well in the north east region. According to him, “You know in a democracy you cannot expect everything to work 100 percent. But in our region from the informatoon available to us, everything went well in Katsina, Kebbi, Sokoto, Zamfara and Kano. “Where people expected that there maybe a problem, the exercise was successful. But anybody that has complain, there is a committee set up by the national executive of the party, they should take their complains there so that they will be attended to.” Recall that Governors Okorocha and Yari were at the fore front for the conduct of fresh congresses and had kicked against the proposed extension of the Chief John Odigie-Oyegun-led National Working Committee, NWC.
Share
Facebook
Twitter
WhatsApp
Pinterest
Linkedin
ReddIt
Email
Print
Tumblr
Telegram
Mix
VK
Digg
LINE
Viber
Naver
Previous articleWill Obasanjo and Buhari will never be cool friends again?
Next articleTrump’s latest shot at the press corps: ‘Take away credentials?’