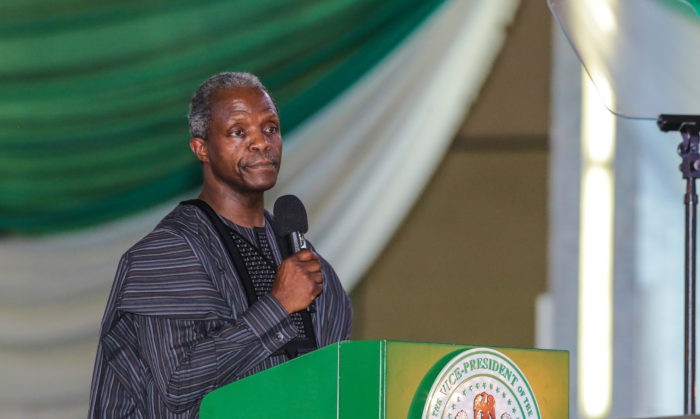 Olalekan Adetayo, Abuja
The Acting President, Yemi Osinbajo, on Sunday said for corruption to be completely eradicated in the country, the fight against the menace must start from churches.
He said it was only when church leaders resolve to ostracise and expose corrupt members of their congregation that the problem could be solved.
Osinbajo spoke at a special service organised to mark this year’s Father’s Day at the Aso Villa Chapel located inside the Presidential Villa, Abuja.
The Acting President, who himself is a pastor of the Redeemed Christian Church of God, said church leaders must begin to talk more on honesty, unlike the current situation that more emphasis is placed on giving.
“Every time that we come to church, we are told about giving.  But we need to talk more about honesty.  We need to talk far more about honesty.  In the same way we talk about giving, we need to talk more about honesty,” he declared.
Osinbajo said church leaders must be ready to confront their members who are living above their means.
He said once the church took its rightful place and decided to expose treasury looters, the nation’s problems would be solved.
Osinbajo said, “If the church says you are not allowed to steal and we will ostracise you in our midst if you did -if what a man has does not measure up to what he earns; if we found that a man has more money than he should have, if a man is earning a salary of a civil servant or a public servant and he has houses everywhere, we have to hold him to account.
“He must be held to account in the church.  He must be told first in the church that ‘we will not allow you here.’
“If the church says ‘we will not accept you here’ or that ‘we will expose you if you are stealing the resources of the country or stealing the resources of a private company or other establishment where you work,’ then we would not have the type of problem that we have in this country.  If only the church does so. Just the church.”
Share
Facebook
Twitter
WhatsApp
Pinterest
Linkedin
ReddIt
Email
Print
Tumblr
Telegram
Mix
VK
Digg
LINE
Viber
Naver
Previous articlePortugal Declares 3 Days Of Mourning As Vast Wildfire Kills Dozens Of People
Next articleHow I Escaped from Notorious Kidnapper Evans and his Gang – Victim