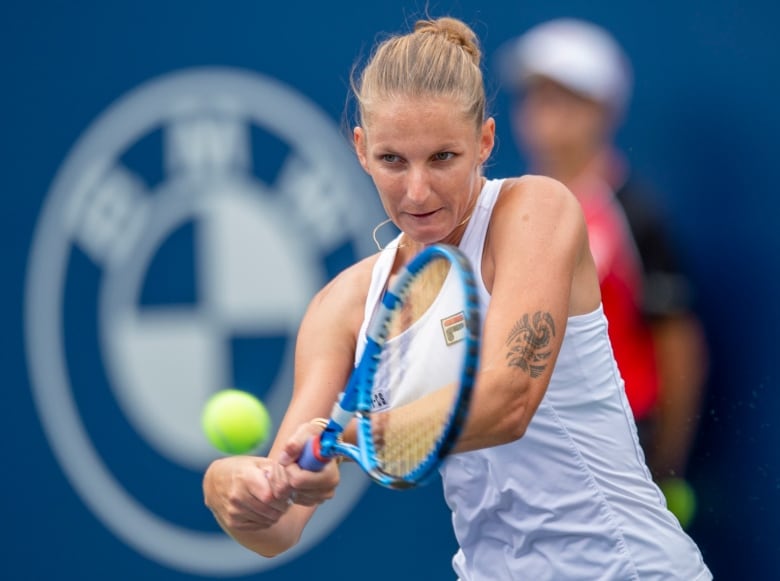 Even as her body faltered, Bianca Andreescu’s sheer will power carried her to an historic victory.

Andreescu overcame a strained groin to become the first Canadian woman to make the semifinal of the Rogers Cup since 1969. The 19-year-old from nearby Mississauga, Ont., defeated third-seeded Karolina Pliskova of Czech Republic 6-0, 2-6, 6-4 on Friday at Aviva Centre on York University’s campus.

After a dominant first set Andreescu struggled with her injury, needing a medical timeout in the second set before digging deep for the victory.

“In the third set I told myself ‘go big or go home.’ Literally go home. My home is like two minutes from here,” said a laughing Andreescu. “I just went out there and I never gave up because it’s not over until it’s over.”

Andreescu is playing in her first tournament since the French Open in May. An injured right shoulder has forced her to miss months of competition.

Making matters worse was that Friday’s victory was Andreescu’s fourth consecutive three-set match. That gives her by far the most time on the hard courts in the women’s singles tournament with a total of eight hours 43 minutes of play.

“It’s not easy, that’s for sure,” said Andreescu, who was still shivering from a lengthy ice bath as part of the treatment on her groin. “Right now, I’m just really happy my mind and my body are holding up. My team too, I’m so sorry guys for putting you through all of that.”

Andreescu will face American Sofia Kenin in a semifinal of the WTA event on Saturday.

Bianca Andreescu overcame a strained groin to beat Karolina Pliskova 6-0, 2-6, 6-4, and become the 1st Canadian woman to reach the Rogers Cup semifinals since 1969. 1:54

Kenin upset sixth-seeded Elina Svitolina of Ukraine 7-6 (2), 6-4 earlier Friday. Andreescu has a career 2-1 record versus Kenin, who upset world No. 1 Ashleigh Barty in the first round of the Rogers Cup.

“I know what to expect from her,” said Andreescu. “She is a fighter, she gets to a lot of balls. So I’m going to go out there and just give my best performance.”

Andreescu then turned her back to cameras to point to the slogan on the back of her sweatshirt laughing “I’m going to ‘just do it!”‘

Like Kenin, Andreescu has become an upset machine, going 6-0 against top 10 opponents this season.

Windy conditions at Aviva Centre seemed to benefit Andreescu as Pliskova had to reset her toss on several serves in the first half. With Pliskova’s greatest strength neutralized, Andreescu dominated all facets of the game in the first set for a quick 6-0 win.

The hours on the court in the past week started to add up for Andreescu as her groin started to act up.

As Pliskova held a 5-1 lead in the second set and a 40-30 advantage in the sixth game, Andreescu asked the chair umpire for a trainer. She still won the next three points to make it 5-2, even as she favoured her groin. 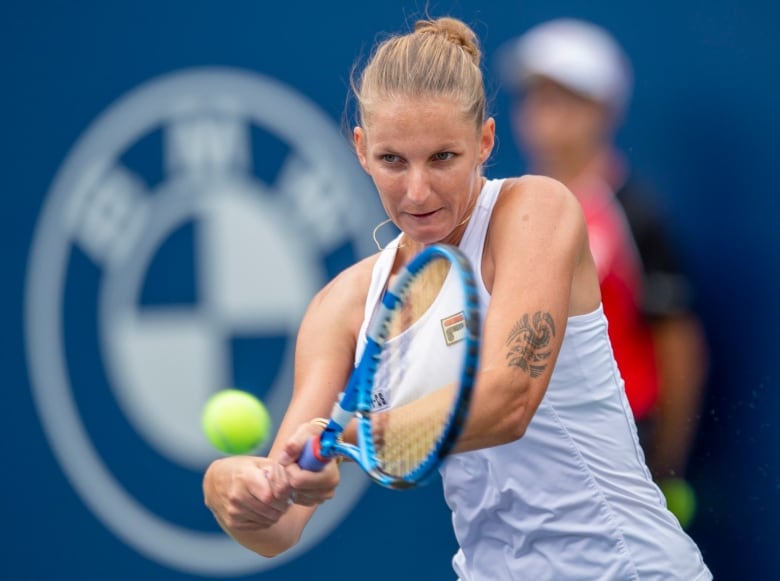 In the next stoppage of play, Andreescu and a trainer went to the locker room for more in-depth treatment. Andreescu caught the eye of her parents in the stands and pointed at her groin as she made her way off the court.

“I got really low on this one ball [Pliskova] hit,” said Andreescu, who said the trainer wanted to tape up her legs in a more private setting. “I felt my groin a little bit. I felt it this morning too. It was a bit sore, but I think it got a little bit worse during the match.”

She came jogging back out with a wrap around her right leg and tape on her left inner thigh.

Andreescu continued to stretch and walk gingerly during stoppages in play, with Pliskova taking advantage and winning the second set 6-2.

In two lengthy games to start the third set, Andreescu continued to struggle with obvious pain in her legs, grimacing after lengthy rallies forced her to sprint all over the court. She battled to a 1-1 tie, but an overhand smash gave Pliskova a 2-1 lead.

‘Try to focus on the tactics’

Andreescu and Pliskova exchanged games again to make it 3-2 for the Czech player, but the Canadian seemed to have shaken off whatever had been bothering her legs earlier in the match.

“It’s hard not to focus on that when it’s hurting at every point,” said Andreescu. “But when things happen like that I just try to focus on the tactics and forget about the pain, but it’s not easy.”

Andreescu screamed as she tied the third set 3-3, but Pliskova fired two aces for the final two points of the seventh game to retake the lead.

Andreescu answered with an ace of her own to tie it up 4-4, then won another game when Pliskova’s return on a break point was well past the baseline.

Pliskova put her return into the net on match point, sending Andreescu on to the semifinals.

Qualifier Marie Bouzkova, also from the Czech Republic, will face Williams in the semis. Bouzkova beat Simona Halep of Romania 6-4 in the first set before the fourth-seeded Romanian retired because of injury.

Serena Williams edged Naomi Osaka in straight sets 6-3, 6-4, to advance to the semifinals at the Rogers Cup in Toronto. 0:28

In men’s action, Rafael Nadal battled back from a set down to defeat Italy’s Fabio Fognini 2-6, 6-1, 6-2 in quarter-final action Friday night at a wind-swept IGA Stadium.

Nadal will meet either countryman and No. 10 seed Roberto Bautista Agut or No. 16 Gael Monfils of France in the semifinals.

Their quarter-final was postponed until Saturday due to inclement weather with Monfils leading 30-0 in the first game of the first set.

Daniil Medvedev breezed to a 6-3, 6-1 upset of Dominic Thiem in first quarter-final Friday before countryman Karen Khachanov followed with a 6-3, 6-3 defeat of Alexander Zverev.