Anand says AstraZeneca doses could arrive from the U.S. this week 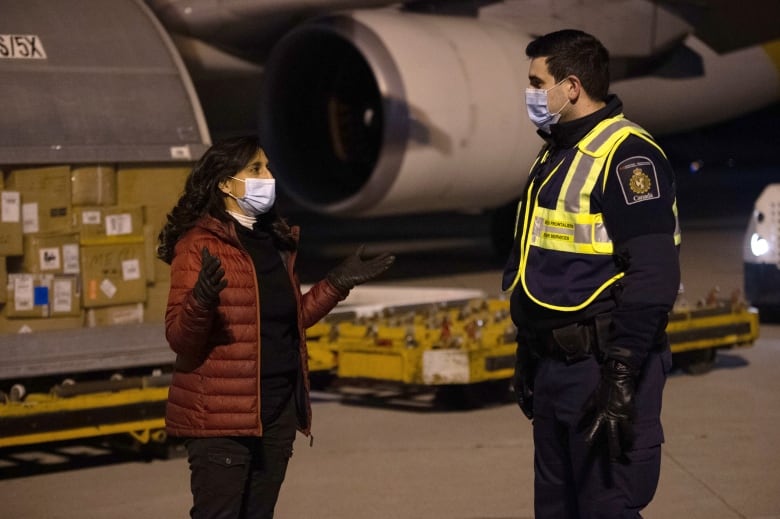 Procurement Minister Anita Anand says Ottawa could take delivery of AstraZeneca-Oxford vaccine doses from the United States as early as this week.

Ottawa’s ongoing talks with the Biden administration about dipping into the U.S. supply of COVID-19 vaccines scored a win last week — a plan to send 1.5 million doses of the AstraZeneca-Oxford vaccine across the border to Canada.

“We’ve put a number of different scenarios on the table. And it’s just wonderful that we’re able to come to an arrangement,” Anand said in an interview Friday on Rosemary Barton Live.

“I just got off the phone with the company discussing the arrival of these doses. We are going to pick them up from the United States and they should be arriving hopefully next week, but definitely before the end of the month.”

The White House confirmed Friday that the U.S. would allow exports of AstraZeneca doses to Canada and Mexico. The two-shot vaccine has a minimum shelf life of 60 days but has yet to be approved in the United States.

Canada approved the vaccine back in February and has signed a contract to receive 20 million doses.

“It’s because of the existence of that contract that we’re able to do an exchange transaction like this,” Anand said. “And in the future, when we have our 20 million doses coming in, we will return that amount to the U.S.”

When asked whether the United States — which has been vaccinating its residents at a rate four times faster than Canada — would consider also releasing Pfizer-BioNTech and Moderna doses, the minister said Canada has a robust vaccine portfolio of its own.

“But my strategy is also to try to accelerate doses from one quarter to the next,” Anand said. “So while we have this diversified portfolio, by the same token, we are exploring all options to make sure we have the earliest deliveries for Canadians.”

One approved vaccine awaiting a delivery schedule is the single-dose Johnson & Johnson shot.

“I spoke with [Johnson & Johnson] on Thursday and in particular raised the importance of a delivery schedule as soon as possible so that the provinces and territories can do their planning,” Anand said.

Canada has inked a deal for up to 38 million doses of the vaccine, which does not need the same cold storage required by the Pfizer and Moderna shots.

Waiting her turn for a shot

Anand said that she and her two sisters act as a personal caregivers for her father. Watching him receive his vaccine, she said, was “a very emotional moment.”

“Just being the person who has led the procurement of these vaccines, to see him actually vaccinated was incredible,” she said.

“There are funny moments in our relationship when he constantly provides me with news that he has read about vaccines, which happens to be the news that I’m working on at the current time.”

The minister said she’ll be waiting her turn to get a shot of her own.

You can watch full episodes of Rosemary Barton Live on CBC Gem, the CBC’s streaming service.