When Your Husband Wants Something in Bed You Think is Gross 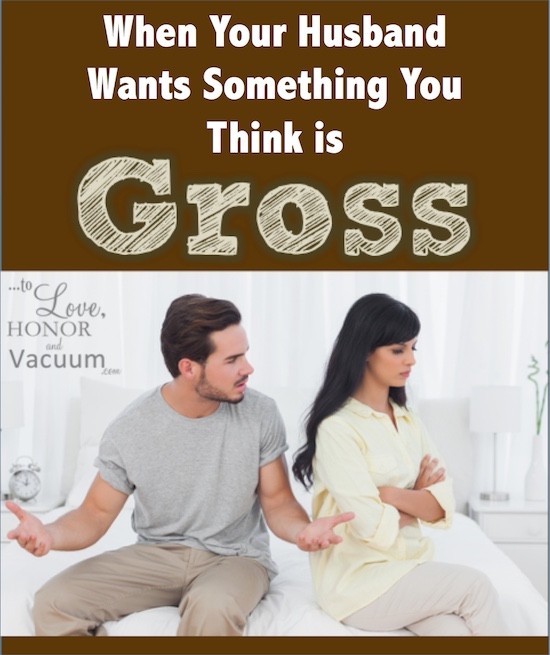 What do you do if your husband wants you to do something in bed that you really hate?

We’re in the middle of the Sizzling Summer Sex Series, and we’ve been talking this week about learning to be passionate, give up control, and help sex not be boring! And so today and tomorrow I want to turn to how to handle it if one of you wants something a little bit spicier than the other! Today we’ll look at what to do if he wants something you really don’t like, and tomorrow we’ll turn the tables. Then Friday I’m going to present an idea that hopefully can really work in your marriage when you’re trying to figure out boundaries in bed.

Here’s a really common question I get:

My husband wants something in the bedroom that I think is just gross. (editor’s note: she spelled out what it is; I want to leave this vague so that my answer applies to more people’s situations! So if you’re struggling with this, insert your own idea here). Do I have to do it?

Great question! I’ve dealt with this before on the blog, and today I thought I’d rerun that post because it fits perfectly in this series.

My quick answer to that question would be, “No, you don’t have to do it.” Sex is supposed to be mutual. It isn’t supposed to be selfish. But that being said, here are just a few thoughts to help you figure this out in your particular situation:

1. Dare Yourself to Make What You Do Enjoy Awesome

It’s honestly okay to say no to some things in the bedroom. Vaginal intercourse–no, you can’t say not to that (I mean IN GENERAL–like you can’t say “we can never do this”, though of course you can say no on certain nights. I’ve got more on that on my series on what “do not deprive” means). Intercourse is the height of intimacy. But other things? Absolutely. No one has to do everything.

But if you do say no, I just dare you to make the things you are comfortable with awesome for your husband! Really throw yourself into it. Dedicate yourself to having a fulfilling sex life–which means getting yourself in the right frame of mind so you can enjoy it, too. If you’re really struggling with this, pick up the 31 Days to Great Sex. It’s only $5. And seriously, it will help. This is what it was written for!

If your husband wants something you don’t, ask yourself, “is it sinful?” Now be careful here, because we often assume that because we don’t like something it must be sinful. But I don’t think the Bible calls very many things sinful in marriage. Anything involving a third party (porn, affairs, fantasizing about a football team): sinful. Enjoying each other’s bodies: nope. (now I think there are things which are definitely a bad idea that don’t involve a third party; but I’m still not sure they’re sinful. I think they’re more in the “everything is permissible, but not everything is beneficial” category).

Why is this important to determine? Because sometimes we’re quick to label things sinful and then we cut things out of the bedroom entirely. And we also start to think of our husbands as perverts. It honestly is okay to say “no”. But just be honest and if it ISN’T sinful, realize that you’re saying no because you don’t find it appealing, not because he’s a pervert. That’s an important distinction!

And sometimes by realizing it isn’t sinful (if it’s something that isn’t), it does help us stretch ourselves a bit. And for many couples, that can be a good thing!

How do you figure out your boundaries in the bedroom in a Christian marriage? Some guidelines!Click To Tweet

3. Is it Dangerous or Degrading?

Some things may not clearly be sinful, but they still seem, well, icky. That could be because some sex acts actually can be physically dangerous. Certain body parts just aren’t designed to be used sexually, and they don’t stretch well and they’re susceptible to disease.

Not just that, but some sex acts can really be degrading and humiliating. Sex should be about bringing you together. Now, there’s nothing wrong with feeling carried away, or with someone wanting to almost “own” the other–that can honestly be a part of passion. But when you’re trying something that really is humiliating or degrading, like punishments or something like that, it’s totally okay to feel weirded out by that. That was never meant to be part of the sexual experience.

4. Be Careful of Porn’s Influence

Maybe the answer to “is it sinful” or “is it degrading” honestly is yes, though. Then what?

Find it difficult to figure out what’s okay to do in the bedroom?

How can you tell what is just fun, and what gets perverted?

In The Good Girl’s Guide to Great Sex I lay out the principles of figuring out your boundaries in the bedroom, and show how hot and holy can actually go together! I also give my opinion on a lot of the things that couples ask about.

If you’re shy, this book can help you figure out God’s perspective on how passionate sex should really be–within proper limits!

4. Be Careful of Substituting Other Things for Intercourse

One thing I’ve found with couples who explore a little more is that sometimes that thing that one of you wants to do starts taking over. Let’s say he enjoys oral sex, for instance, more than he does intercourse, and he starts wanting that more than wanting intercourse. This is really dangerous.

I’m all for play! I think play is great–hence the term foreplay. But it is FOREplay. It shouldn’t be the whole thing.

That doesn’t mean it can NEVER be the whole thing, but if another sexual act becomes your regular sexual encounter, rather than vaginal intercourse, there’s a real danger and a problem. Now sometimes, when health concerns arise, that’s necessary, and there’s nothing wrong with that. But intercourse was designed to unite us spiritually as well as physically; we’re supposed to be feel one. Sex isn’t supposed to be about getting the greatest orgasm; it’s supposed to be about feeling close. Now, when we feel close the physical ALSO tends to feel better. But our pornographic culture has really infiltrated the bedroom so much that we almost use each other more than we make love to each other. I don’t think that’s a good dynamic.

So if you want to explore, that’s great! But make it about play, not about replacing intimacy.

What do you do if your husband wants something in bed you think is gross? Some guidelines!Click To Tweet

If there’s something he likes that you’re willing to do, but you really don’t like it, consider once a month having his nights/her nights. Once a month you’ll make love totally for him, and once a month for her. And then the other times you’ll just do it as you prefer to together.

That way he doesn’t feel deprived, but you both get what you want. Maybe your night starts with a long back massage. That’s totally fair!

If, of course, you absolutely CAN’T do it, see #1. That’s totally fine. But if you just dislike it, here’s another way to handle it (and I’ll be spelling out exactly how to handle this on Friday!)

Ask your husband, “are there things that you’d like in the bedroom that you’ve been afraid to ask about?” Let’s have that conversation!

And ask him how you two think you should decide on boundaries, too.

Find other posts in the Sizzling Summer Sex Series here.

Do you have trouble figuring out what the boundaries are in the bedroom? Let’s talk in the comments!