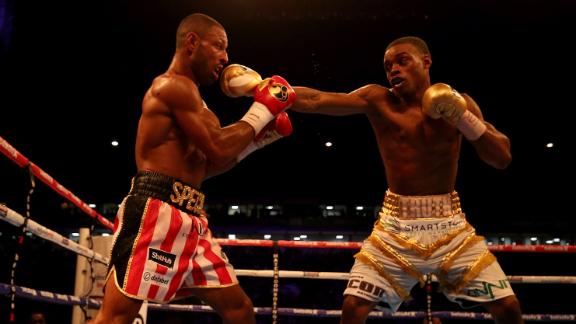 Errol Spence Jr. was tabbed by virtually everyone to win a world title and become an elite fighter since his days on the 2012 U.S. Olympic team.

Spence, the 2015 ESPN.com prospect of the year, developed as most expected, and on Saturday, he fulfilled the expectations heaped on him by so many — including himself — by knocking out Kell Brook in the 11th round of an excellent fight to take his welterweight world title before 27,000 at Bramall Lane Football Ground in Brook’s hometown of Sheffield, England.

And the impressive part is that Spence was not all that impressed with himself. He was poised and calm before, during and after the fight. There was no wild celebration. He expected this.

“I don’t think I was as sharp as I wanted to be,” Spence said. “I think the nine-month layoff kind of threw me off a little bit. I was kind of sluggish in there.”

It sure didn’t look like that. But now just imagine what an opponent will look like after the fight should Spence ever deliver his A-level performance?

Spence, 27, of DeSoto, Texas, clearly was able to block out the hostile crowd and easily handle the biggest fight of his career against the best opponent he has ever faced. But as far as Spence is concerned, this was only the first step to toward his ultimate goal of unifying the 147-pound titles.

And so he made it clear whom he wants to fight: the guys with the other hardware.

“The goal is to unify titles. I want to fight Keith Thurman [and] Manny Pacquiao,” Brook said. “I want to fight the champions, unify the division and become the undisputed champion of the world.”

Thurman (28-0, 22 KOs) unified two belts with a split-decision win against Danny Garcia on March 4, but he will be out of action likely until early next year after having right elbow surgery last month.

Manny Pacquiao (59-6-2, 38 KOs), the legendary icon from the Philippines, is still going strong at age 38 having rebounded from his decision loss to Floyd Mayweather in their 2015 mega fight. Pacquiao rebounded to easily outpoint Timothy Bradley Jr. in their third fight 13 months ago, and then easily outpointed Jessie Vargas to claim yet another world title in November. However, Pacquiao is scheduled to defend against Australia’s Jeff Horn in Brisbane, Australia, on July 2.

Obviously, neither Thurman nor Pacquiao will be next for Spence, but at least Thurman is quite possible. They’re both with adviser Al Haymon and have ties to Showtime. That’s the fight Spence really seems to want.

“I’ve been calling Keith Thurman out for a long time. You say I have to prove myself and I haven’t fought anybody, well I just beat the so-called biggest welterweight in the division, Kell Brook,” Spence said. “So now, Keith Thurman, come out. It’s time to fight.”

After Saturday’s fight, Showtime host Brian Custer said on the air that he had texted with Thurman, who told him he would be willing to fight Spence, although his focus right now is on rehabilitating his bum elbow. “Then it’s up to negotiation,” Custer said Thurman told him.

Pacquiao? That would be a great fight also, but don’t count on it. He’s with Top Rank’s Bob Arum, and fights against Haymon’s top guys seem unlikely to be made, not to mention the fact that a fight with Spence is probably too great a risk for not enough financial reward.

Ringside for the fight were two other name welterweights — both also with Haymon — in Shawn Porter, a former titlist who lost his belt to Brook back in 2014, and England’s Amir Khan. Maybe one of them will be next, although the bigger fight for Khan would be against his British rival Brook in what would still be a huge fight despite the fact that both would be coming off losses.

Whoever gets the opportunity to challenge Spence in his first defense, they won’t be getting any favors. Spence is entering his prime, and he is a very tough man.

Brook, who was making his fourth title defense, can certainly speak to that.

“Spence is one of the best kids I’ve been in with, if not the best,” Brook said.