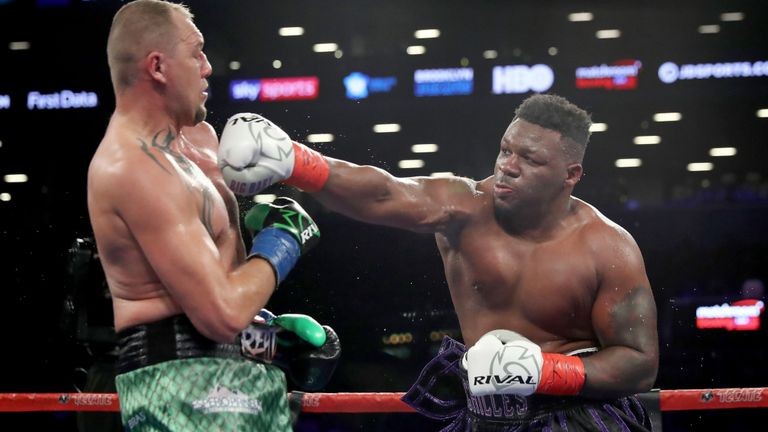 Jarrell Miller edged himself closer to a heavyweight world title shot with a one-sided decision win over Johann Duhaupas at the Barclays Center.

In an eliminator for Anthony Joshua’s WBA belt, ‘Big Baby’ displayed good stamina and hand speed to send out a timely reminder in his Brooklyn hometown, winning via scores of 119-109 twice and 117-111.

The fast-talking New Yorker rattled the scales at Friday’s weigh-in – coming in at 304 lbs – but he was far from laboured as the fight began, stalking his French foe and hammering home with body blows in a one-sided opener.

A series of overhand rights were then pummelled in by ‘Big Baby’, leaving Duhaupas clearly disorientated and forced to hold on to see out the round.

Seemingly hurt, the 37-year-old then had to eat a massive right uppercut in the second and Miller, instinctively sensing victory, reigned in a barrage of punches, but again ‘Reptile’ survived.

Duhaupas finally started to get a foothold in an even third as the pair exchanged leather on the inside, the Frenchman landing a quick one-two after the unbeaten American missed wildly.

Despite a promising start to the fourth for Duhaupas, Miller, leaning in to impose his weight, fought back well behind a swift left jab, several clubbing hooks and uppercuts crashing home before he controlled the fifth with his impressive hand speed – more eye-catching uppercuts drawing oohs and ahs from the crowd.

As the heavyweight dust-up reached its second half, the brave Frenchman’s face started to look a bloody mess as Miller menacingly marched forward, hammering away with little concern about anything coming the other way.

That remained the situation as the home favourite continued to produce the cleaner variety of work down the stretch, a bombardment of left and right hooks landing clean in the 11th, but still the tough and rugged European courageously held on.

Speaking afterwards Miller said: “I was trying to get him out of there but he’s a tough guy. That’s my first time going 12 rounds and it let me prove that a guy who is over 300lbs can go the distance.

“I could get in better shape. Now we will maintain things, keep working, eat clean and feel comfortable.

“I know I would run Anthony Joshua out the ring. Tell him to come over here and I will toast that English muffin. I’m from Brooklyn, I ain’t running from nobody.”

Daniyar Yeleussinov, a Rio 2016 Olympic gold medallist, made a blistering start to life in the paid ranks, blowing away unbeaten American Noah Kidd inside three rounds.

The classy Kazakh boxed well on the back-foot before finishing the contest with a sickening body shot.

Imposing Uzbek super-lightweight Shohjahon Ergashev extended his perfect record to 12 victories from as many fights with a one-sided points win over Zhimin Wang.