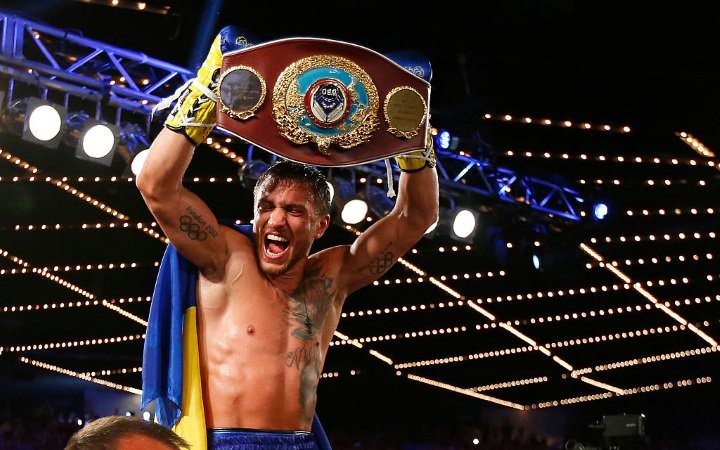 LOS ANGELES — Junior lightweight world titleholder Vasyl Lomachenko has his eyes on being the No. 1 pound-for-pound fighter in the world — and he’s not far away from that lofty status — but to keep his train moving in that direction he had to take care of challenger and big underdog Miguel Marriaga.

No problem. At all.

Lomachenko absolutely toyed with Marriaga, knocking him down twice and winning by one-sided seventh-round knockout before 4,102 on Saturday night in the main event of the Top Rank ESPN card at the Microsoft Theater at LA Live.

“I did everything by the plan that we had,” Lomachenko said.

The fight came to an end when Marriaga’s corner mercifully stopped the fight after a brutal seventh round in which Marriaga took extreme punishment.

Lomachenko (9-1, 7 KOs), the two-time Olympic gold medalist from Ukraine whom many consider the greatest amateur in boxing history (396-1), retained his 130-pound world title for the third time.

“I never saw anything like this. He’s unbelievable,” said Top Rank promoter Bob Arum, who has been in boxing for more than 50 years. “Not only does he have the knowledge, he has the skill set that I’ve never seen before. Fast, reflexes, everything and he really entertains. Who else did that? Muhammad Ali.”

Arum promoted 27 Ali fights and has consistently said Lomachenko is the most skilled fighter he has seen since Ali.

“He dominated the fight,” Marriaga said. “I connected with some good punches, but I couldn’t get the result I was looking for. I wanted to continue the fight, but my corner stopped the fight. He basically overwhelmed me with pressure.”

As usual, Lomachenko began by probing Marriaga and looking for a place to land his pinpoint shots. By the time the round was over, he had landed stiff jabs and hard body shots without taking anything clean in return.

By the second round Lomachenko was firmly in control. He landed combinations to the body and head, and backed up Marriaga. Marriaga (25-3, 21 KOs), whose only losses have been in world title fights — the other two were decisions in featherweight title matches — was playing defense because he knew what was coming, but he had no answers.

Lomachenko continued to dazzle in the third round. He popped Marriaga with a body shot, pivoted to the side and came upstairs. He is like a boxing symphony.

In the third round, he landed a clean straight left that dropped Marriaga to his backside. Marriaga, returning just 3½ months after losing a decision challenging featherweight titlist Oscar Valdez, easily beat the count and then Lomachenko motioned for him to come at him in the corner. Marriaga, 30, of Colombia, obliged and Lomachenko nailed him and wiggled his hips and made a face at him as the crowd went wild. Marriaga must have landed something solid, however, because by the fourth round Lomachenko had a bruise under his right eye. An accidental head-butt in the fourth round opened a cut over Lomachenko’s left eye.

“You see my face? I didn’t like this,” he said, pointing to the cut.

Then he added, “I need to work on my defense,” drawing a laugh from the ringside reporters he was talking to.

Lomachenko, however, appeared unaffected by the cut because he continued to pepper Marriaga with every punch in the book, throwing from all angles, sometimes with power, sometimes just for range. But he landed punch after punch and was in total control in every round.

Lomachenko, 29, had a huge seventh round. He battered Marriaga all over the ring. He left Marriaga absolutely befuddled and taking damage all over the place.

Finally, moments before the round ended, Lomachenko landed a hard left hand and Marriaga crumpled to the mat. The bell ended the round, but Marriaga was done and his corner threw in the towel.

With little to talk about given how easily Lomachenko took out Marriaga, the conversation after the fight quickly turned to what he will do next. Arum said Lomachenko will be back on ESPN in December to defend his title, probably in New York.

He said he offered Saturday night’s fight to junior featherweight titlist Guillermo Rigondeaux (17-0, 11 KOs), also a two-time Olympic gold medalist, who has been calling out Lomachenko. However, Arum said that while he and Dino Duva of Rigondeaux promoter Roc Nation Sports had “sort of agreed on a number [of dollars] and the kid won’t get on the phone with Dino. We’ll get guys in with Lomachenko. You just have to pay them.

“I think there’s a few guys. There’s Rigondeaux if he answers Dino’s call. There’s [Orlando] Salido (who defeated Lomachenko in his second pro fight). And there’s Berchelt, who has a world title.”

Lomachenko’s answer to the nonstop question he gets when it comes to whom he will face next was the same as always. He doesn’t care. He never has been one to pick and choose. His goals have been clearly stated; he wants world titles and big names.

“For me it doesn’t matter,” Lomachenko said. “I will fight anybody. I want to fight and I want to unify titles. [If I fight] Rigondeaux I think it looks the same as [the fight with Marriaga].

“It is not my job [to find opponents]. My job is to work my best boxing in the ring.”