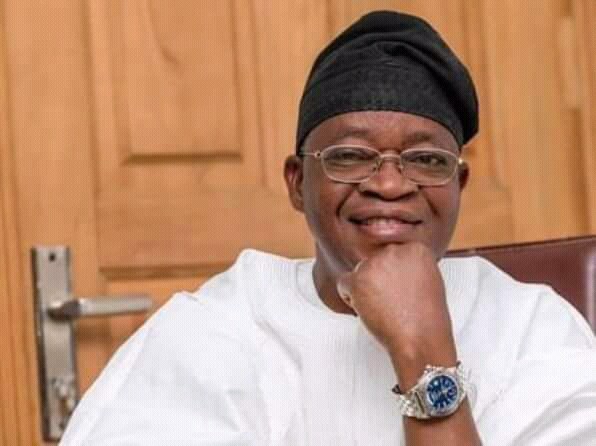 The Osun Governor-elect, Adegboyega Oyetola, on Friday paid a `Thank You’ visit to President Muhammadu Buhari at the Presidential Villa, Abuja.

The News Agency of Nigeria (NAN) reports that the governor was accompanied on the visit by outgoing governor of the state, Rauf Aregbesola and Gov. Abdullahi Ganduje of Kano state, who served as chairman, APC campaign committee for Osun governorship election.

Oyetola, who spoke with State House correspondents after the closed door meeting with President Buhari, pledged to consolidate on the achievements of the outgoing governor of the state.

He also pledged to run a transparent government and to improve on the infrastructural facilities in the state.

“I came to say a big thank you to Mr. President for the support he gave to us during the election and to thank the leadership of our party all over the country for being with us throughout the period.

“I also assure him that by the grace of God, I must run a very transparent government.

“The governor and the party have done so well in Osun and I will want to continue to consolidate on those achievements and improve on them in the area of infrastructure, particularly the economy.

“It is a continuation of the legacies that he built. I believe that the people have confidence in our party, they believe in us and we will not abuse the opportunity given to us to continue to be in government,’’ he said.

Oyetola also promised to review the state’s revenue sources with a view to boost Internally Generated Revenue (IGR) and ensure that we are able to look inward for sustainability.

According to him, payment of workers’ salaries and pensions will continue to receive the deserved attention by his administration.

“We have actually been addressing that (salary). Recently, we have paid about four months of salary backlog and I believe we will settle all the outstanding and we have started even paying full salary.

“I believe we will be able to sustain it by the grace of God.

“We will review our (Internally Generated Revenue) IGR to ensure that we are able to look inward for sustainability,’’ he added.