What Buratai said after close-door meeting with Buhari 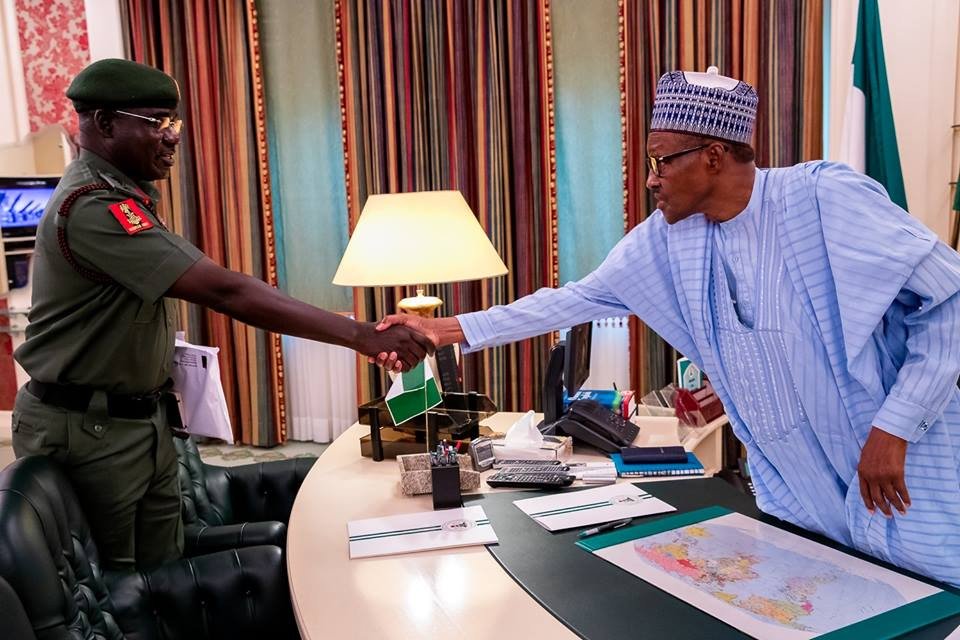 President Muhammadu Buhari on Thursday in Abuja received briefing from the Chief of Army Staff, Lt.-Gen, Tukur Buratai, on the happenings in the Nigerian Army as well as latest security situations across the country.

Speaking to State House correspondents after the closed door meeting, Burutai said he was duty bound to regularly brief the president on the activities of the Nigerian army.

Buratai reassured that the Nigerian Army would continue to collaborate with other security agencies to safeguard lives and property as well as protect the territorial integrity of the country.

He said the recent deployment of a battalion of soldiers to Birnin Gwari, Kaduna State, was in line with the Army’s guidelines.

“We will continue to operate along with other security agencies that have been charged with the responsibility of securing our country.

“The deployment of a battalion to Birnin Gwari in Kaduna state is in line with the Nigerian Army’s order of battle that was approved in 2016 and we are going to implement all the directives of our Commander in Chief, in order to achieve strategic objectives of the Nigerian government.

“So that is essentially why we had to deploy a battalion there and the soldiers will work alongside other security agencies,” he said.

On the ongoing fight against Boko Haram insurgency, Buratai disclosed that the Nigerian army had since commenced the construction of network of roads within the Sambisa forest to further consolidate the gains being recorded in the battle field.

Buratai also reiterated the determination of the Nigerian army to turn the Sambisa forest into tourist and relaxation centres.

“That is progressing very well and Nigerians should be rest assured that our Operation Last Halt will further consolidate on the achievements so far made and we hope the Internally Displaced Persons in that area will go back to their communities and pick up their lives again.”