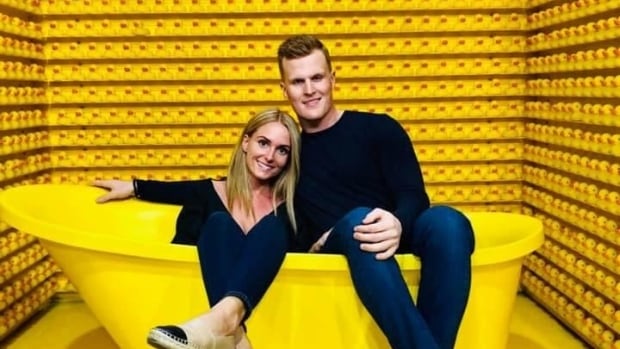 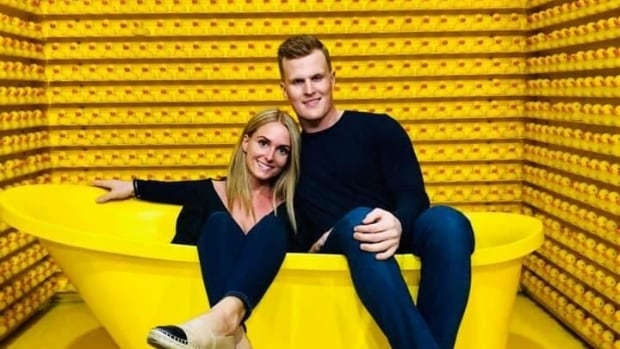 The wife of Edmonton Oilers’ centre Colby Cave, who died in April after suffering a brain bleed, simply wanted people to know how the pandemic is impacting people like her – people who can’t say a final goodbye to their loved ones.

“My 25-year-old husband died alone,” Emily Cave wrote in a story on Thursday. “I have no clue what his last breath was like. I have yet to be able to have a funeral because of this global pandemic.

“So for goodness sake, wear a mask. Wash your freaking hands and it’s not the end of the world if you can’t go to house parties or do things that are essentially a ‘luxury’ in your blessed world.”

Cave said she’d been seeing and hearing a lot of complaints about restrictions aimed at curbing the virus not just in Alberta, where measures were increased Thursday, but around the globe.

“I try to be super respectful and mindful. But I kind of just hit my breaking point a little bit yesterday,” she said in an interview with The Canadian Press.

It wasn’t the first time Cave has gone online to express herself. She posted heart-wrenching updates on Instagram after Colby was placed in a medically-induced coma at a Toronto hospital in April, detailing how she and his parents could only see him through a window and speak to him with a walkie talkie because of COVID-19 restrictions.

Doctors performed emergency surgery to remove a colloid cyst that was causing pressure on Colby’s brain, but the forward from North Battleford, Sask., died on April 11.

When the pandemic began taking hold in North America in March, Cave and her husband were concerned about staying healthy and protecting others, but never would have imagined how they were about to be impacted by the virus.

Her latest Instagram story has shown, however, that she isn’t alone in finding ways to grieve through the health crisis.

Immediately, people began sharing her post. By the time she woke up on Friday, her phone had “blown up,” and her words had caught the attention of outlets like TMZ and the New York Post.

Several people also got in touch with Cave to share their own stories.

“I’ve had people reach out saying `I haven’t had a funeral for my loved one’ or `I was on FaceTime saying goodbye to my loved one’ and all of that….It’s probably the worst experience you could ever go through,” she said. “And if [my post] can open a few eyes, that’s great.”

People have been reaching out in various ways since Colby’s death, Cave said. At first it was odd but now she finds solace in the messages.

“The more and more I get and the more and more time goes on, it’s really actually comforting just to know I’m not the only one, I’m not alone,” she said. “And if me sharing things can help people realize that they’re not alone, I’m more than willing to continue to share stories.”

Some of the comments have brought tears to her eyes, including the one where someone wrote “Colby chose his wife well.”

“It made me cry but I just felt like I was doing him proud,” Cave said.

She hopes the story she shared this week opens eyes and reminds people that they may not be aware what impact COVID-19 is having on the lives of others.

“Just be careful, be kind, look out for each other, don’t take things for granted — all those cliché things that, until a trauma happens to you, you can’t really grasp or really appreciate,” she said.