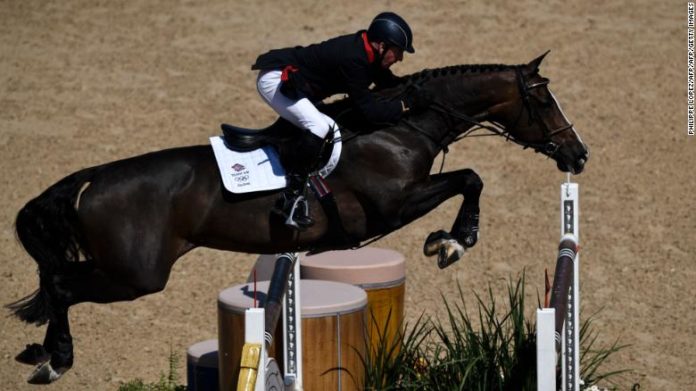 Athletes from all sports have ways of staving off the ravages of time.

Golf legend Gary Player, now 82, swears by his 1000-sit-ups a day. Footballer Ryan Giggs played 22 long seasons for Manchester United thanks, in part, to yoga.
So what’s the secret to 62-year-old show jumper John Whitaker’s longevity?
“I’m pig headed and stubborn!” admits the Briton, who won was winning World Championship medals as far back as 1980.
“Apart from riding I don’t do any fitness training but I’m busy all the time and I’m not lazy. My family know they can’t tell me to slow down. I want to keep competing and I will until I can’t do it anymore.”
At his age, Whitaker could be forgiven for slowing down a little. Perhaps being more selective about the horses he rides, or cutting down on the number of international events he competes in.
After all, he’s been one of the world’s leading showjumpers for nearly 45 years. But with the peak of the summer jumping season getting under way, that’s not his style.
In fact, according to the sport’s governing body, 2017 was his busiest year for some time. 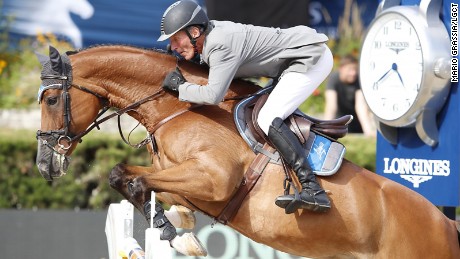 He competed internationally on 15 different horses in over 321 competitions. A normal week would see him travel to a show on a Wednesday or Thursday, compete through to Sunday, fly home to train on a Monday and Tuesday before heading off again.
It’s a brutal, year-round sport that sees horses and riders compete across the globe, from US events in the winter to stops in Hong Kong and Shanghai.

The Whitaker family are one of the sport’s most famous dynasties. His younger brother Michael has competed alongside John on British Olympic teams.
His children Robert, Louise and Joanne, as well as most of his nephews and nieces, also compete at an elite level in jumping.
His wife Claire, too, is a familiar face at the side of the competition arena and travels with him to most shows as well as owning one of his top horses Argento.
The rest of his string predominately belong to HRH Princess Haya’s “Team Harmony” who have supported Whitaker since 2014.
“I still ride five horses every day,” he says. “Nothing has changed in that regard. I don’t feel 62 at all. I might wake up in the morning feeling a bit achy but for some reason, when I’m on a horse I feel just as I did in my twenties.
“I’m far better riding than I am off a horse.”
His results back this up. Whitaker’s ability to adapt depending on the type or temperament of a horse has helped him collect 24 medals at Olympic, World and European championships during his long, distinguished career.
One of his most famous horses was Milton, the first showjumping horse to win more than £1 million in prize money and one of the most loved and recognized horses in the history of the sport.
Despite not currently having a horse of Milton’s caliber, Whitaker is still looking ahead to a possible seventh Olympic appearance. He’ll be 65 by the time the 2020 Tokyo Olympics come around.
“For the last few years I haven’t had a real superstar,” he admits. “I’ve got some very competitive horses that can win the right classes but realistically they aren’t championship horses.
“At the moment I have some very nice younger horses. Everyone wants to go to the championships and have a big aim.” 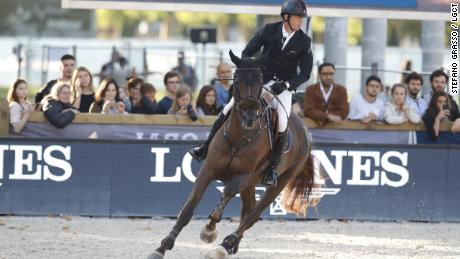 ‘You don’t bounce at my age’

Anyone who rides a horse knows the dangers of falling off. Those risks are amplified by the effects of aging.
“I don’t necessarily have a fear of falling off at my age but it is certainly more painful!” says Whitaker.
“There is now this moment, when I leave the saddle, knowing I’m going to fall off and I’m flying through the air thinking to myself, ‘that this is definitely going to hurt!’
“You don’t bounce at my age! When you’re young, you fall off and you don’t hurt yourself so it doesn’t worry you.”
So knowing the potential risks of a heavy fall, surely he would avoid riding more unpredictable, younger horses and stick to the safer, more seasoned campaigners?
“I ride the younger horses more than my experienced ones,” insists Whitaker. “Every day, if need be, when I’m at home as they are often too big, strong and naughty for my daughters who would usually ride them when I’m away.”
It was off one of these tricky youngsters that was the last horse to unseat Whitaker.
“I last came off in February whilst competing in Spain,” he recalls. “The horse reared up and came over backwards onto me. I remember someone came over and said, ‘you shouldn’t be riding five-year-olds at your age’ but I said it’s just got to be done.
“I can’t fear falling even if it could end my career. If I think I need to ride a tricky youngster then I will. If I fall off then so be it. I have to accept that.” 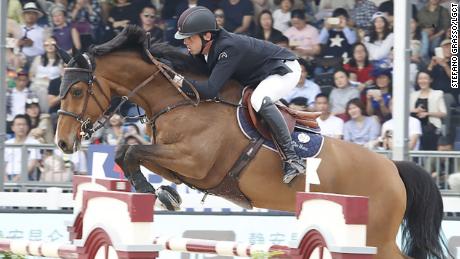 LGCT Hamburg: Harrie Smolders shines 02:06
The straight-talking Yorkshireman shows no signs of slowing down. He’s once again part of this year’s Longines Global Champions Tour and has a title to defend in the Global Champions League team competition.
In 2016, he won the inaugural league title as part of Valkensvaard United, and then last year, after switching teams to Hamburg Diamonds, he lifted the trophy once again.
”This year I’m with the Cascais Charms but we’re not fairing very well at the moment,” he admits, “but there’s still a long way to go and plenty of jumping to be done. The prize money is fantastic and it’s top competition which I enjoy.
“The whole Global Champions Tour has lifted the sport in general. The money on offer has made the other shows raise their game to compete with them. It’s been so good for the sport.”

It’ll be a sad day for the sport when Whittaker does decide to hang up his spurs but for the moment that’s still some time away.
“I’m still enthusiastic,” he maintains. “I have some nice horses and on my day I can beat anyone in the world. I always get asked when I’m going to retire but as long as I feel I can compete at the highest level and as long as I can pay my bills, I’m happy.
“It’s an expensive sport so I need to keep making money. At the moment I’m riding well. I have some good young horses that are coming through the ranks so I can see me still riding for at least another five years. After all, what else would I do?”
Share
Facebook
Twitter
WhatsApp
Pinterest
Linkedin
ReddIt
Email
Print
Tumblr
Telegram
Mix
VK
Digg
LINE
Viber
Naver
Flip
Copy URL
Previous article
Kenyan athlete Eliud Kipchoge wins 2018 London Marathon as Mo Farah breaks British record
Next article
CSA 4-Day Series | Eastern Storm vs AET Tuskers