Teachers warn that some students have ‘checked out’ of school, and it will be hard to get them back 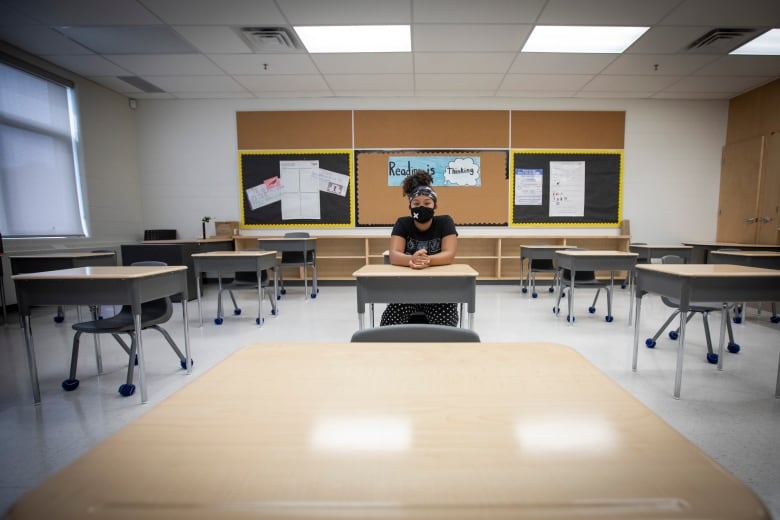 Toronto-area high school teacher Kirby Mitchell has long focused his attention on students who’ve been labelled as having behavioural issues, who are often racialized, marginalized and teetering on the edge of dropping out of school completely. He works to identify, support and re-engage them in the school system, and amid COVID-19, he’s grown increasingly concerned about them.

Enrolment figures have fluctuated this school year, with students who were expected to attend missing from in-person as well as virtual classes. It’s not clear exactly how many are unaccounted for, but according to public school boards and divisions across the country, there may be a host of reasons for why they haven’t shown up: from kindergarten students who deferred starting to families who moved regions or into private schools to kids now being home-schooled.

Still, there’s growing concern about schools’ ability to locate students absent from attendance rolls — and the need to quickly get them back into class.

With so much focus on school safety measures, students who have dropped off the grid haven’t been a priority, says Mitchell, and that can lead some to feel they’re not wanted by the school community and make it easier for them to withdraw.

He says he can relate to that instinct based on his own school experience as a student.

“I came to school mainly for the sports and to see my friends,” he said. “Indirectly, I became part of a school and a learning environment, but if I didn’t have those reasons to come and that space to be in … No one’s checking for me. I had no reason to go there. It’s easy to leave.”

WATCH | Mitchell explains why it’s easier to lose track of students in the pandemic:

High school teacher Kirby Mitchell addresses how easy it can be for virtual students to disengage from the educational system during the pandemic. 1:58

Difficult to track down

He was assigned 29 students on paper but only 22 attended class. In October, he lost four more students — kids who he knew benefited from in-person learning — when they switched to virtual school and lost their connection to him, as well as to their home-school community.

It can be difficult to keep track of where students are going, he said. “Are parents simply pulling their kids and doing some home schooling? Are pods being set up? … Have they switched boards?”

As the school year continues, he’s hearing from students who feel increasingly “checked out mentally, physically, emotionally” and recognizes how difficult it’s been for them to stay focused on learning amid the revolving door of coming into school and being sent home to quarantine because of COVID-19.

Like many educators, he’s been calling and emailing parents and families, as well as being open to chatting with students via social media, in hopes of maintaining connections and “making sure that every avenue has been exhausted before [they] simply just stop coming.”

Parents and caregivers are in survival mode, Williams said, “dealing with this the best that they can right now, so the priority might not be to respond [to school officials].”

Middle school teacher Jay Williams discusses the difficulties in keeping track of students amid COVID-19 and calls for plans to reintegrate students who have been missing from the classroom. 1:18

‘These could be rich or poor kids alike’

Canada has been slow to recognize that a significant number of students are currently out of school and that unaccounted for absences are a serious issue, says Irvin Studin, president of the Institute for 21st Century Questions, a Toronto-based think-tank.

“When we closed the schools here, we presumed that everyone elegantly went online because we ourselves were online. And we forgot that at least six per cent of the population in Canada has no access to online,” Studin said.

Students who have dropped out may have done so for a variety of reasons, he explained, from those in vulnerable homes to families whose finances have suffered amid COVID-19, preventing their kids from accessing the tools needed for online schooling.

There may be students, like Mitchell mentioned, who have seen their earlier connections to school — friends, extracurricular groups and teams, mentors — fade away amid the pandemic.

Some families, Studin said, opted to give their children a gap year (or two) out of school, expecting they will simply make it up at a later date.

“These could be rich or poor kids alike,” he said.

Studin’s institute, working with peers in dozens of countries worldwide, is pushing to raise the profile of this issue, which he says is unfolding parallel to “the economic catastrophe and the public health catastrophe” of COVID-19.

“We have by September to identify all these kids on a personal level and bring them back to school,” Studin said. “We are pushing for actual strategies with implementation apparatus to find and reintegrate these children.”

UN sounds the alarm on effect of school closures

UNESCO has also been raising the alarm about the crisis of children and youth around the globe not attending school and the need to address the impact of pandemic school closures, learning loss and the adaptation required for education systems going forward.

“This is a serious problem,” said Silvia Montoya, director of the Montreal-based UNESCO Institute of Statistics (UIS). “The UN secretary general has a complete point.”

Vulnerable and disadvantaged communities that had already experienced barriers to education prior to the pandemic have faced even more challenges since, Montoya said.

She said globally, about 100 million kids are falling below a minimum proficiency level in basic reading as a result of the pandemic.

“This is equivalent to all the students [in 2018 ] that started first grade on the planet,” she said.

The good news, she said, is that you can remedy the damage done by finding ways to bring kids back to school and putting into place “mechanisms to try to support this process.”

‘The longer we wait, the worse the situation gets’

We cannot afford to wait until the next school year to engage with students who have fallen behind and bring missing students back, said Karen Ebanks, who has been teaching in-person and online high school students under a hybrid, quadmestered system in the York Region of the Greater Toronto Area.

“The longer we wait, the worse the situation gets,” she said.

High school teacher Karen Ebanks says the problem is larger than simply truancy in the present; it also involves re-engagement in the future. 0:48

This school year has been an unpredictable roller coaster, with opening and closing of in-person classes proving disruptive for students’ learning, says Ebanks, who teaches math.

She’s heard from colleagues about students going missing for days at a time or not showing any engagement in class for weeks and teachers and administrators unable to connect with families through calls or other types of outreach.

“When students become more and more disengaged … the harder it’s going to be to bring them back,” she said.

Ebanks says she is concerned that the pandemic will cause some students to despair and feel hopeless and be more inclined to give up on school and academic achievement.

“It’s also going to affect their pathways down the road, in terms of future courses they can take and future career options and … their ability to be resilient,” she said.

“If I don’t have them willing to engage with me, there’s no opportunity for me to lean in and try … to draw them in. They’re just not there. And I think that’s a really big, big fear: of reaching out and having nothing reach back.”