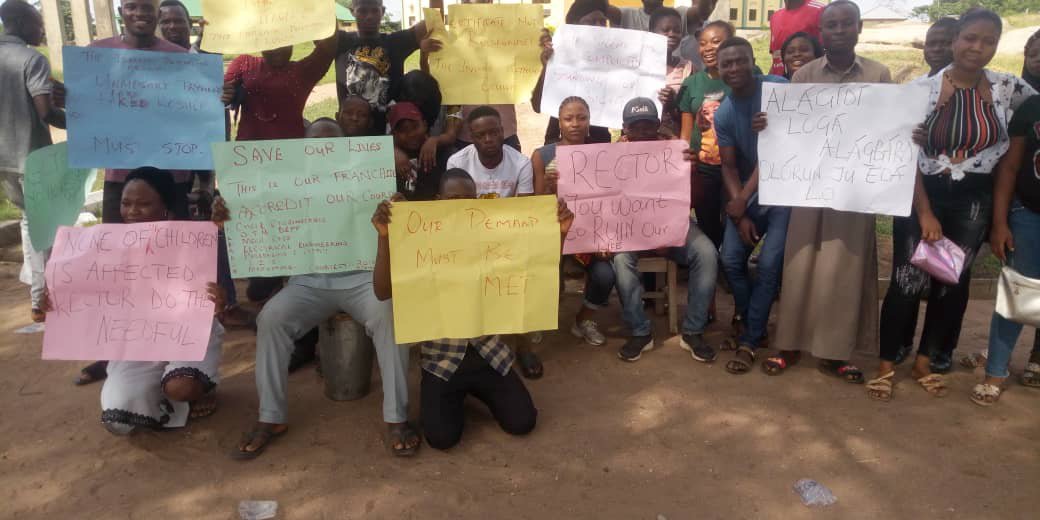 Scores of graduates of The Ibarapa Polytechnic, Eruwa in Oyo State, on Tuesday embarked on a peaceful protest over their denial for the National Youth Service Corps (NYSC) scheme and non-issuance of certificates for them by the institution since they graduated two years ago.

The students, who converged inside the school campus, before marching out for the protest, showed their grievances to the management of the institution, saying that it was unfortunate that they were yet to be mobilised for the mandatory one year national service. 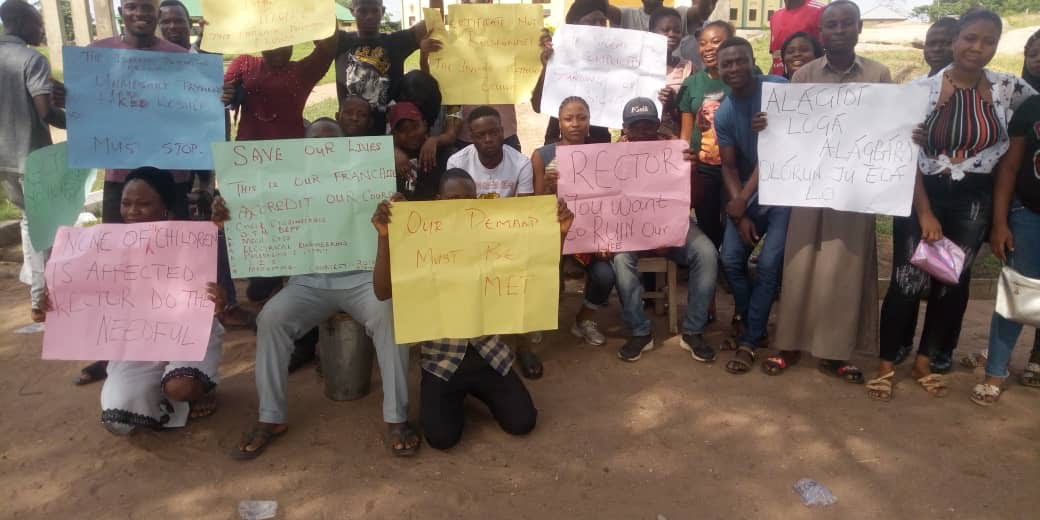 The students, while protesting, locked up some offices, this partially paralysed the academic activities of the institution because most of the staff of the school could not have access to their offices. They added that they were protesting, because since they graduated two years ago they we’re yet to receive their certificates.

Olaoluwa Ademoyega, while speaking on behalf of his colleagues, said that the issue on ground was that their department has not been accredited, adding that this was the hindrance of their mobilisation for NYSC service year.

He said, “We were here on a peaceful protest, to show our displeasure on state of our education, we are yet to be given our admission letter two years after we have graduated, our certificate has not been issued to us, and we were yet to go for the NYSC due to the none accreditation of the course we studied when we were in school.

“We want the school management to accredit our course so that we can go for our service year, we are also calling on the Oyo State government to look into this issue and resolve it.”

National Association of Nigerian Students (NANS) JCC in the state, Moronkola Teslim while speaking, said that the students were on a peaceful protest to demand for their right which the management of the institution has been denying them for the past two years.

He noted that NANS as a body was also behind the protest because it is part of the duties of NANS to listen to the cry of Nigerian Students.

Moronkola emphasised that the school management should address the issue by giving room for dialogue between them and the students, as he urged the management of the institution to be sincere with their promise because they have failed on some promises they made two years ago

“We decided to join this protest because we want justice to prevail, the students had been denied of their right for two consecutive years, the school authority and the government of Oyo State should come to the aids of this students”.

Adejumo explained that the school management is currently on top of the issue.

He noted that the rector of institution is currently at Kaduna to meet with the National Board of Technical Education (NBTE) concerning the issue of accreditation.

Adejumo said, “In 2014, NBTE came to our institution for the validation of all our programs, 22 programs was validated and NBTE also came for resource inspection, there was deficiency in core engineering course which need to upgraded and this was what led to the non accreditation of the course”.

Adejumo pointed out that shortage of funds also responsible for the non accreditation of the course, adding that the money coming to the school purse from the Oyo State government was not enough to take care of the institution.