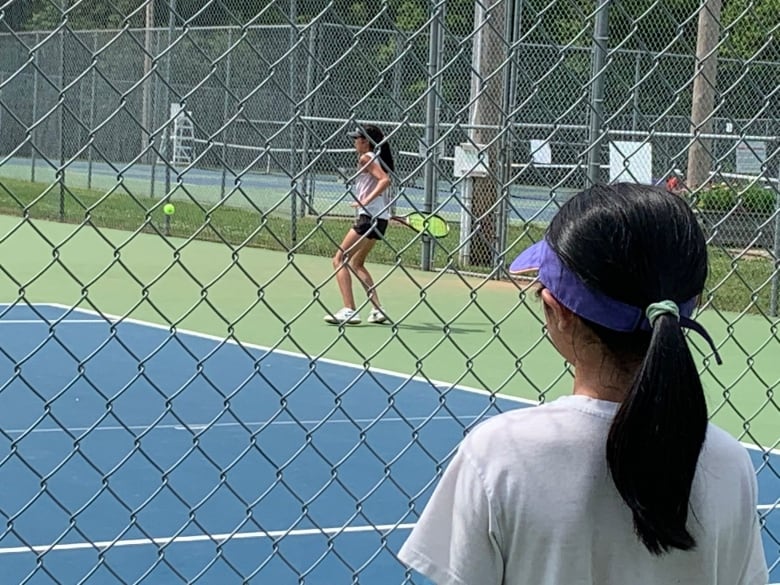 They were supposed to just hit the ball right back to each other. Keep the rally going. This was a practice drill, after all, not a match.

But when you’re the best tennis players for your age on P.E.I., you train together almost every day and you happen to be sisters, there’s bound to be some sibling rivalry.

When 14-year-old Maggie Chong and her 11-year-old sister Tiffany get on the court together, their competitive instincts are difficult to resist.

“I’m a competitive person,” Tiffany said. “I always try to win the point.”

That, however, can sometimes be a challenge for the coach.

“When they’re playing against each other there’s definitely some sibling rivalry,” said Brian Hall, the executive director of Tennis P.E.I., who first saw the girls’ potential when they moved to the Island from Vancouver in 2014.

“A lot of tennis training is done with mutual rallying back and forth and that is a challenge because they try to outdo each other and so the rallies wouldn’t last very long. They’re past that now, but it was a challenge.”

If either of them continue on, I think they’ll go far.— Brian Hall, Tennis P.E.I.

That determination is one reason they are ranked No. 1 in the province — Maggie in both the under-14 and under-16 girls division, and Tiffany in the under-12 division.

Maggie is also the top-ranked under-14 girls player in Atlantic Canada. Tiffany is No. 2 for U-12.

“They’re fun to work with, they’re good athletes, they’re very fast and have good determination on the court,” Hall said. “If either of them continue on, I think they’ll go far.”

The girls’ parents, Jacky Chong and Rita Wang, are originally from Taiwan. Maggie, Tiffany and their sister Ella, 17, were born in Vancouver. After moving to P.E.I., they travelled to Hong Kong for a few years.

Lots of time on the court

In the summer, they spend most of their time on the tennis courts.

On Mondays and Wednesdays they play indoors, do some body training and then head out to hit balls for a few hours. On Tuesdays and Thursdays, they play in Stratford and in Charlottetown.

Weekends are reserved for tournaments. They always cheer for each other.

“I want her to get better,” Maggie said of Tiffany. “I want to help her improve.”

The next big tournament is the Atlantic Junior Championships, which will be held in Charlottetown Aug. 18-22.

If they finish in the top three in their age category, they will qualify for the Canadian championships in September.

Maggie, who is a big fan of Serena Williams and 2019 U.S. Open winner Bianca Andreescu, said her goal is to someday compete in the Olympics.

Tiffany, meanwhile, has her sights set on her big sister.

“I know she would obviously win,” Tiffany said. “But I still would always want to play against her and I hope to beat her someday.”