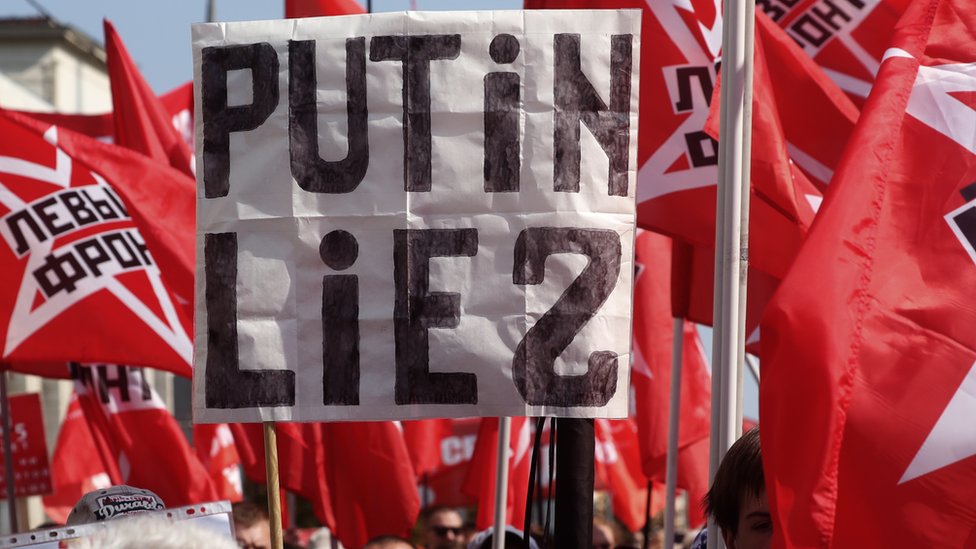 Further protests against pension reforms have taken placed in Russia, despite the recent concessions offered by President Vladimir Putin.

The initial proposal was to raise the retirement age for women to 63 from 55, and for men to 65 from 60.

On Wednesday he said the pension age for women would only be raised to 60.

Mr Putin has said reform is a financial necessity, but it has been met with a hostile reception and led to a steep fall in his popularity.

Unions have warned that many will not live long enough to claim a pension. Russian men have a life expectancy of 66 while for women it is 77, the World Health Organization says.

What are the pension plans?

Under the new plan, to be implemented from 2019, the retirement age for men will be increased gradually from 60 to 65.

Before Mr Putin’s intervention women were to have to work another eight years from 55 to 63 – their planned retirement age has now been reduced to 60.

Prime Minister Dmitry Medvedev has previously said the decision was motivated by the fact that Russians are living longer and leading more active lives.

He said there were 12 million working pensioners in Russia, equal to nearly a quarter of all pensioners.

What has Putin said about this?

In a TV address last week, Mr Putin said the move to raise the retirement age for men and women had been delayed for years and risked causing inflation and increasing poverty.

Postponing it further would threaten the stability and security of Russian society, he said.

“Any further delay would be irresponsible,” he said. “Our decisions should be just and well-balanced.”

Until his TV address he had attempted to distance himself from the row, and had in the past promised that the pension age would never be raised on his watch.

Tens of thousands have rallied across Russia in recent weeks.

Sunday’s Moscow protest saw many carrying the red flags and banners of the Communist Party, the principal organiser of the protest.

A smaller protest was held by the centre-left Just Russia party, which police said attracted some 1,500 people.

Unusually for Russia, protesters against the reforms come from all sides of the political debate.

The initial announcement was made at the same time as the World Cup in Russia began, prompting criticism that the Russian government was trying to bury bad news.

Why does Russia want to raise the pension age?

Most economists and many Russians agree there is a problem. The population is getting older and the state is spending more and more on pensions.

After the economic chaos of the early 1990s, Russia’s population plummeted. The birth rate has since shown some signs of improvement, but it is not happening fast enough.

President Putin has just signed a new bill on pension spending, envisaging a deficit of more than 265bn roubles (£3.1bn; $4.2bn) in 2018. That’s 1.6% of the entire state budget expenditure.

It is clearly not a sustainable situation, especially in tough economic times.