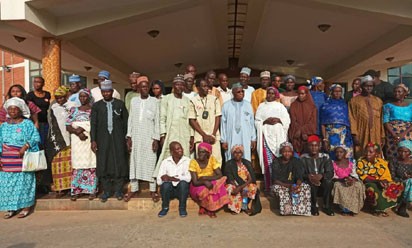 Release of Dapchi girls renewed our hope, Chibok girls’ parents tell Obasanjo
… God is currently testing your faith,Obasanjo tells parents of chiboks girls
Thirty parents of the adopted Chibok school girls have told the former Presidents Olusegun Obasanjo that the release of the 104 Dapchi school girls has rekindled their hope of getting their children back alive. Chibok school girls parents with ex President Olusegun Obasanjo at the ‘Olusegun Obasanjo Presidential Library’ The parents who visited Obasanjo at the ‘Olusegun Obasanjo Presidential Library’ spoke through the Chairman of the association of Chibok girls, Yakubu Nkeki ,saying that the meeting was organised to corroborate a movement going on in America against violence in schools. Nkeki also said he and other parents were tired of kidnappings of school children ,adding that such act has created fear in the minds of the children and making them have apathy against education in the country. It would be recalled that 276 Chibok school girls were kidnapped on April 14 2014 while over 100 of them havw either escaped or released through negotiation. Also on February 19,2018. 110 of the Government Girls’ Science Technical college Dapchi in Yobe state were also kidnapped as 104 of them have also been released unhurt, five dead and one held back. Nkeki said “The meeting with former President Obasanjo is one of several meetings we will be having to seek advice and counsel, to garner high level support for unrelenting pressure to free our daughters. Witnessing the happy return of the Dapchi girls by the government, has given us renewed hope that we will soon be reunited with our daughters after 4 years of agonising separation. “Today, Saturday 24th March, students around America and the world are raising their voices against violence in schools. They are tired of seeing their classmates killed and living in fear. We, the Chibok parents, express our solidarity with all other parents affected by shootings, killings, and kidnappings in schools in Nigeria and elsewhere. We join the students in their demands for a safe place to learn. “We believe these peaceful voices will galvanise action by the government and political leaders to protect students, ensure Safe School policies are implemented, and assure access to education without fear of violence. “As we know, only too well in Nigeria, violence against students in our country has assumed increasingly deadly dimensions. “We empathise with the traumatized parents of the returned girls, the deceased girls, and the Leah Sharibu’s parents. Sadly, we are intimately familiar, with what they are experiencing now. Twenty one days from now on April 14th, 2018 it will be exactly 4 years since our children were forcibly removed from the school where we thought they would be safe. “We are glad that our solidarity visit to Dapchi on Wednesday 21st March, coincided with the safe return of 105 girls and one boy. We pray that others will also be there to share in our own joy when our girls come back home. “We call on national, regional and global influencers and authorities to support the Nigerian government to bring our nightmare to an end, and to take measures so that we can send our remaining children to school with peace of mind, and give them an opportunity for a better future.” Meanwhile earlier , Obasanjo had enjoined the parents to remain hopeful adding that God has never done and will never do anything wrongly. The former President who preached to the parents from the holy bible also appealed to them to keep their faith alive as God has never made mistake. Chibok school girls parents with ex President Olusegun Obasanjo at the ‘Olusegun Obasanjo Presidential Library’ He said, “I will be talking to you from the Holy bible and I will take my words from ‘John 16 vs 33’. “I want you to know that whatever happens has happened for a good purpose because God will never make a mistake. Whatever happens might have happened to put our faith to test and as a result make us more stronger and matured. “Never loss hope in God,Never loss faith, because God knows better and he know what he is doing. “Especially those of you who are parents, I understand the way you feel but I want to appeal to you that God has never done and will never do anything wrong.”
Share
Facebook
Twitter
WhatsApp
Pinterest
Linkedin
ReddIt
Email
Print
Tumblr
Telegram
Mix
VK
Digg
LINE
Viber
Naver
Previous articleWe won’t stop blaming past administration – Presidency
Next article”I hope they won’t now remember that Gen. Danjuma keeps “looted” billions of dollars in his borehole” Governor Fayose says