OJ Simpson to be freed from Nevada prison 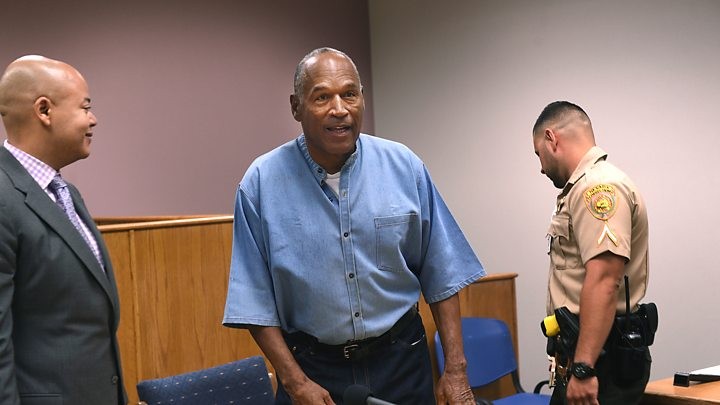 Former US football star and actor OJ Simpson has been granted parole after nine years in a Nevada prison.

“Thank you!” said the 70-year-old, bowing his head as the board approved him for release in October.

Simpson is serving time for armed robbery, assault with a deadly weapon and 10 other charges over a 2007 confrontation at a Las Vegas hotel.

He was acquitted in 1995 of the murders a year earlier of ex-wife Nicole Brown Simpson and her friend Ron Goldman.

The former Hall of Fame running back was found guilty in 2008 of the botched Las Vegas robbery – exactly 13 years to the day after he was sensationally cleared in the so-called trial of the century.

He and a group of five others stormed into a hotel room to confront two sports-memorabilia collectors and seize items that he claimed belonged to him from his career.

The hour-long hearing for Prisoner 1027820 took place at the Lovelock Correctional Facility, a medium-security prison in the Nevada desert.

Simpson told parole officials on Thursday the objects he took from the Las Vegas hotel room were later ruled by officials to legally belong to him.

“I’ve spent a conflict-free life,” the prisoner said during the hour-long hearing.

However, in 1989 Simpson admitted spousal abuse after police responded to a domestic violence call at his home.

According to police records, his wife had run from the house screaming to officers: “He’s going to kill me!”

More than two decades after the murders, the slow-speed car chase through the streets of Los Angeles and his sensational acquittal, OJ Simpson still commands an audience.

Television networks across the US interrupted their regular broadcasting to cut to the drab setting of the Lovelock Correctional Center in the high desert of Nevada.

And there he was, now 70 years old and dressed in simple blue prison garb but still instantly recognisable – the man who was a sensation from the moment he burst on to the American football field.

When he was asked by the parole board commissioners about how he would cope with media attention if he were to be released, the man they used to call The Juice laughed.

It must have felt like they were asking him how he would cope with breathing the air.

The families of Nicole Brown Simpson and Ron Goldman are not laughing – and there is evidence that OJ Simpson’s supporters are a shrinking band.

The country was once divided, not least on racial lines, about the verdict in the “trial of the century” but a recent poll suggested that only 7% of Americans now believe the fallen star was not a killer.

On Thursday, Bruce Fromong, who was one of Simpson’s victims in the robbery a decade ago, testified in favour of his release.

“I’ve known OJ for a long time,” said Mr Fromong. “I don’t feel that he’s a threat to anyone.

“He’s a good man. It’s time to give him a second chance.”

Simpson appeared to dab a tear.

The prisoner told the commissioners he had helped establish a Baptist prayer meeting in prison, adding: “I could have been a better Christian.”

The prisoner also rejected suggestions he had an alcohol problem.

“I’ve done my time,” he said. “I’ve done it as well and as respectfully as anybody can. I think if you talk to the wardens they’ll tell you.

“I’ve not complained for nine years. All I’ve done is try to be helpful… and that’s the life I’ve tried to live because I want to get back to my kids and family.”

The Nevada Board of Parole Commissioners said it had received hundreds of letters for and against Simpson’s parole.

In 2013 the board granted him parole on some of his convictions, but not for the more violent charges.

His daughter, Arnelle Simpson, choked up as she told the parole board: “My experience with him is that he’s like my best friend and my rock.”

But Simpson’s legal problems are likely to continue after he is released.

An attorney for the family of Ron Goldman vowed to pursue him for due payment of damages.

Despite the 1995 not-guilty verdict, a civil court jury held Simpson liable for the deaths of his ex-wife and her friend, awarding $33.5m (£25.8m) to their families.

Two years ago a court enlarged that judgment to about $58m, but it remains largely unpaid.

Legal experts say the families could claim a portion of Simpson’s future earnings, such as book deals or television appearances.

However, under federal law Simpson’s estimated $20,000 monthly pension from the National Football League is out of reach to creditors.

Following his playing career, he appeared in television commercials before taking roles in movies like the comedy The Naked Gun.