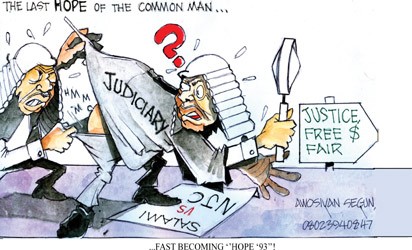 ABUJA – Sequel to petitions from the Economic and Financial Crimes Commission, EFCC, the National Judicial Council, NJC, on Thursday, constituted seven panels to investigate 25 Judges fingered in sundry financial crimes. The legal body equally sacked Justice Michael Goji of the High Court of Adamawa State for refusing to proceed on transfer to the Mubi Judicial Division of the State High Court since July, 2017. NJC which is headed by the Chief Justice of Nigeria, CJN, Justice Walter Onnoghen, maintained that the action of the judge amounted to gross misconduct. Despite recommending Justice Goji for compulsory retirement to Governor Bindo Umaru Jibrilla of Adamawa State based on the advice of the State Judicial Service Commission, NJC, in a statement signed by its Director of Information, Mr. Soji Oye, directed the embattled Judge to immediately vacate his office, as well as to refund salaries he received in the last 10 months. The Council said it took the decision at the end of its 86th Meeting which was held on May 8 and 9 May. According to the statement, “The Adamawa State Judicial State Commission had conducted an investigation on the conduct of Hon. Mr. Justice Goji, following the directive of the Chief Justice of Nigeria, after receiving the complaint of his misconduct from the Adamawa State Chief Judge. “Aside from the recommendation for compulsory retirement, Council also directed that he should refund all salaries received by him from July, 2017 till date, failing which the Adamawa State Government is to deduct the amount from any entitlement due to him and remit same to the National Judicial Council which pays salaries of all Judicial Officers in the Federation. “In the interim, the Council in exercise of its disciplinary powers under the Constitution of the Federal Republic of Nigeria, 1999, as amended, has suspended Hon. Mr. Justice Goji from office pending his removal from office”. Meantime, NJC said it considered reports of various Investigation Committees and dismissed petition written against Justice Paul Adamu Galinje of the Supreme Court, and against Chief Judges of Jigawa and Enugu States, Justice Aminu Sabo Ringim and Justice Peter Umeadi, respectively. “The petition against Hon. Mr. Justice Paul Adamu Galinje of the Supreme Court was dismissed sequel to its withdrawal by Hon. Yaro Abarshi and Hon. John Yobi Yarafa and others, who alleged that he interfered in a Chieftaincy matter in Taraba State. “The petition against Hon. Mr. Justice Aminu Sabo Ringim was also dismissed because the Petitioner, Dr Jamil Gwamna who wrote to Babatunde Raji Fashola, SAN, Minister of Power and Works who in turn forwarded same to the National Judicial Council, withdrew the petition. “The allegation was that the Hon. Judge ordered the arrest, assault, and detention of staff of Kano Electricity Distribution Company (KEDCO) when they disconnected the electricity at the State High Court and the Judge’s house for non-payment of bills. “The Committee that investigated the matter found that the Petitioner could not show or prove that Hon. Mr. Justice Ringim instructed or directed the arrest of KEDCO’s staff. “Council did not find any reason to further investigate Hon. Mr. Justices Paul Galinje and Aminu Ringim after the withdrawals. “Petitions written against twenty-five (25) Judicial Officers and others by EFCC were also considered by Council after which it resolved to empanel seven (7) Committees to look into the allegations. “Petitions against various Judges were dismissed for, lack of establishment of misconduct, being subjudice or that such petitions were matters for appeal. “The dismissed petitions were against Hon. Mr. Justices A. I. Chikere and J. T Tsoho, Emeka Nwite and Nnamdi Dimgba of the Federal High Court, Hon. Mr. Justice Adetokunbo Banjoko of FCT High Court, Hon. Mr. Justice Taminu Zailani, Chief Judge, Kaduna, Hon. Mr. Justice M. A. Adeigbe, High Court, Osun State (who had already retired from the Bench), and Hon. Mr. Justice E. N. Ogbuiji, High Court, Rivers State. “Council at the Meeting also recommended twenty-one (21) Judges for appointment as Chief Judges, Grand Kadi, High Court Judges, Sharia Court Kadis, President, Customary Court of Appeal, and one (1) Member, Code of Conduct Tribunal. “Council also received the Report of the Performance Evaluation Committee of Judicial Officers of Superior Courts of Record in the Federation on sixteen (16) Judges invited by the Committee to explain their low performance in the last two (2) to four (4) quarters in the year 2017”, the statement further read.