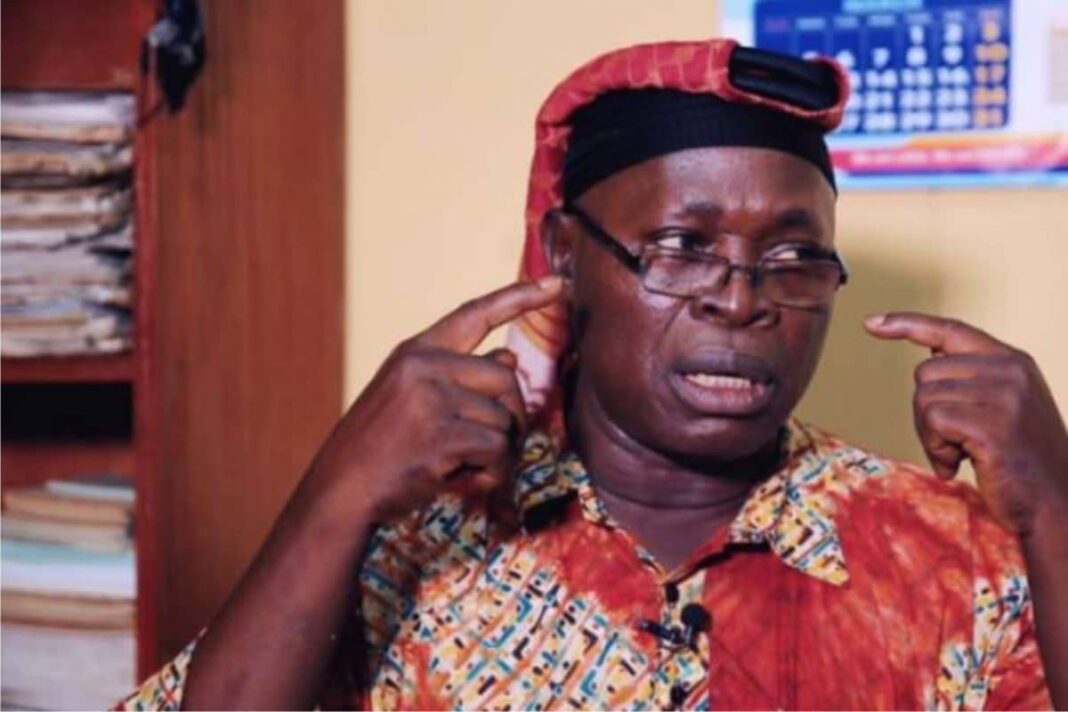 Nigeria news : Religious intolerance Islamic group blasts Christian body over attack on Sultan, makes revelations, The Muslim Rights Concern (MURIC) has attacked the Christian Association of Nigeria, CAN, for its recent attack on the Sultan of Sokoto and President-General of the Nigerian Supreme Council for Islamic Affairs (NSCIA), Alhaji Muhammad Sa’ad Abubakar.

The Sultan had argued that Christians were not being persecuted in Nigeria. He also revealed that CAN did not table any complaint of persecution at the Nigerian Inter-Religious Council (NIREC). which is the official National interfaith platform for treating such matters.

This drew the ire of the president of CAN, Dr. Samson Ayokunle, who blamed the Sultan for not waiting for the next NIREC meeting before disagreeing with him in public.

However, in a statement to DAILY POST on Monday, signed by its director, Prof. Ishaq Akintola, MURIC accused Ayokunle of lying, deception and incitement.

It added, “MURIC takes serious objection to the response of CAN to the Sultan. Imagine CAN president, Dr. Samson Ayokunle, arguing that the Sultan should have waited for the next meeting of NIREC to fault his (Ayokunle’s) claim instead of debunking it publicly. How reasonable is that?

“How can the Sultan wait for a private forum to fault a lie that was told in public? Are the discussions in NIREC in the public domain? How can you remove a woman’s clothes in the market place and expect her friends to wait until she arrives home naked before they cover her up? Isn’t that warped logic?

“Those who make provocative statements in public should not expect a pat in the back in the privacy of their offices. As you make your bed, so you will lie on it.

“The Sultan is a notable bridge-builder primus inter pareil and a peace-maker nulli secundus. If some religious leaders specialize in creating tension, the Sultan’s vocation is dousing tension. If some leaders are adept at inciting their followers, the Sultan is always there to calm nerves.

“With his dynamism, his high mobility, his proximity to Nigerians of various backgrounds, the Sultan has won the respect and admiration of compos mentis Nigerians regardless of religious and ethnic leanings.

“Expectedly, he enjoys the loyalty of Nigerian Muslims such that when he speaks, he speaks for the entire Muslim populace in the country. He is level-headed and has never incited Muslims. Not even once. He is well known as an advocate of peace. This explains why he is called the Sultan of the people.

“Is it fair to blame such a man for telling you the truth? MURIC will not stand akimbo while CAN weaves its web of lies around the Sultan. Can lied by saying Christians are the targets of Boko Haram and bandits.

“That is a lie from the pit of Jahannam and CAN knows it. Exempli gratia, Zamfara State is widely known as the base of banditry. How many Christians are in Zamfara?

“All those kidnapped by bandits in Zamfara are Muslims. Did the Muslims once accuse Christians of being the perpetrators? Facts are sacred. Why is CAN trying to distort history? Why is CAN lying?

“The Bible says, ‘Lying lips are an abomination to the Lord’ (Proverbs 12:22). It also says. ‘…He who breathes out lies will perish’ (Proverbs 19:9). In his letter to the Colossians, Apostle Paul warned, ‘Do not lie to one another’ (Colossians 3:9 – 10). Why then is the president of CAN lying to his followers? Is this not a case of ‘Do as I say but not as I do?’ Religious leaders should not be found lying.

“The problem with Nigeria is the proliferation of religious leaders whose behaviours contradict the tenets of their professed religion. They lie at will. They incite their followers. Nigeria is the only place on earth today where acrobatic religiousity is compounded with paradoxical criminality.

“The leaders deliberately lead their followers towards articulated spirituality for the purpose of political and economic exploitation. This country will begin to know peace the moment the citizens start to crosscheck claims made by religious leaders and stop listening to merchants of aggravated religiousity.

“If you cannot stand the heat, don’t go into the kitchen. If you use your freedom of speech to tell lies and incite your followers, you cannot stop another person from exercising his own freedom of speech to speak the truth and promote peace. What is the CAN president afraid of? Why doesn’t he want the Sultan to speak up? Is he just realizing that truth, no matter how long, will always overwhelm falsehood?

“It is now crystal clear to discerning Nigerians that CAN has the abstract noun ‘trouble’ and the transitive verb ‘to forment trouble’. We are not referring to the entire Christians of Nigeria per se, but the officials and leaders of the Christian body who take decisions and speak for all Christians in the country even though without consulting the latter. We know there are thousands of peace-loving and honest Christians in this country. Is it not high time CAN listened to such people?

“Some religious offices have been commercialised and the holders of public offices in certain religions are being held hostages as religious leaders claim that they were instrumental to the formers attaining such positions. All the lies and propaganda are for the purpose of justifying the juicy rewards from these public office holders. Interestingly, Muslims do not indulge in such mischief.

“It is outrageous for CAN to claim that Christians are being persecuted in Nigeria. Where? How? When? By who? Is it in this same Nigeria or is there another country on earth called Nigeria? We challenge the CAN president to draw up a list of such persecutions with names of the persecutor and those of the victims, including dates and places of occurrence.

“In fact we will go further to add to the compromise from our side. CAN president should tell the whole world the demands of Nigerian Christians in concrete terms. We mean demands which they have probably been making in the past and which the Nigerian government is yet to grant.

“On our part, we will table our concrete demands which we have been making from federal and state governments but which have hitherto been denied. Interestingly enough, some of our demands have been granted Nigerian Christians even without the latter asking for them. So who is being persecuted? Who is the persecutor? Who is being oppressed? Who is the oppressor? Who is the victim? A dispassionate examination of these posers will reveal the identity of the group that is shedding crocodile tears.

“Who took the Muslims’ only day of worship (Friday) away from them and gave Saturday and Sunday to Christians? Who stopped the Muslims from using their 800 years old Shariah and forced the Christian common law on Nigerian Muslims throughout the country? Who outlawed marriages ministered in mosques but legalized marriages conducted in churches? Who demonized Islamic banking but idolized Christian Western banking?

“Who gave the Christians 1st January but deprives Muslims of 1st Muharram? Who organized the lopsided 2014 national conference where Muslims who constitute majority of the population were given a paltry 189 delegates while Christians who are the minority had 303? Who locked the Nigerian Muslim girl-child out of school over an ordinary head-scarf called hijab? Who is forcing Muslim students in Christian private universities to attend church on Sundays? Who demolished mosques in Ekiti and River’s States? Who is the real oppressor now?

“Fact check: Rev Fr. Hasan Kuka is the Bishop of the Catholic Diocese of Sokoto. His office is just a stone’s throw from the Sultan’s palace in the same town. Has anyone ever threatened Father Kuka in Sokoto? Governor Tambuwal and the Sultan himself were present during the opening ceremony of that office. Is that persecution?

“Fact check: The Emir of Kano has renovated churches attacked by Boko Haram in Kano. Vice President Yemi Osinbajo narrated how another Muslim governor in the North rebuilt and renovated all churches attacked by Boko Haram in his state. He narrated this publicly in his speech at the Annual General Assembly of the NSCIA held in December 2019 in Abuja. Is the renovation of churches by Muslim leaders now termed persecution by CAN?

“It is clear that CAN cannot substantiate any claim of persecution. CAN’s claim is therefore dubious, deceitful and quixotic. CAN is simply heating up the polity and inciting its members without any justifiable cassu belli. CAN is fueling tramadolised religiousity.

“Before we drop the anchor, we advise CAN officials to stop deceiving its followers with imaginary tales of persecution. In addition, CAN should, in its own interest, desist from whipping up sentiments and inciting its membership against both the government and Muslims in the country.

“Responsible leadership demands truthful mentorship. Rwanda, Liberia and Sierra Leone learnt the lesson too late and they paid heavy prices. It is not wise to start what one cannot finish.”