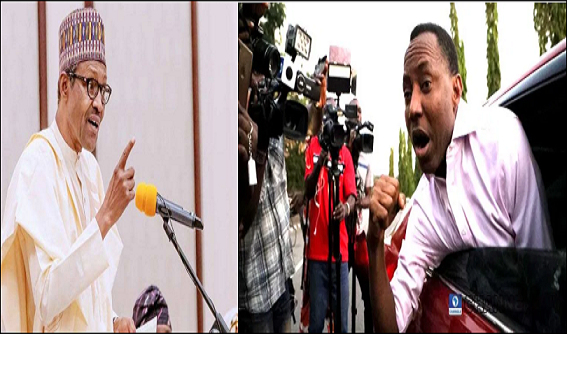 just get over the ‘irritant’ activist and #RevolutionNow convener, Omoyele Sowore, as he greeted another activist, Comrade Amitolu Shittu on his 55th birthday.

In a message, Buhari contrasted Shittu’s peaceful advocacy for a better society “without playing to the gallery or with any self-promotion and personal aggrandizement”.

There was no mention of Sowore’s name, but the reference was unmistakably clear who the shade being thrown was meant for.

Expatiating on the contrast further, Buhari offers his definition of what activism should be:

“Activism is not the same thing as anarchy or fomenting insurrection”, the statement by Femi Adesina, the media adviser said.

Sowore, Saharareporters publisher and a failed presidential candidate in the 27 February election, had mobilized Nigerians for street protests to demand a revolution in Nigeria on 5 August. On 3 August, DSS operatives plucked him off in Lagos and detained him, in defiance of two bails given by the courts. His illegal detention became a huge international embarrassment for the Buhari administration.

Since then, Aso Rock spin doctors have not stopped attacking Sowore, once compared as a security threat like Boko Haram.

Buhari praised him as an irrepressible social activist and saluted his sense of commitment to a better society, which he resolutely advocates without playing to the gallery,

The President recalls Amitolu’s long and close relationship with human rights lawyer, Chief Gani Fawehinmi, rising to become Deputy National Chairman of National Conscience Party (NCP), and lauds him for keeping the memory of his mentor evergreen”, the statement added.