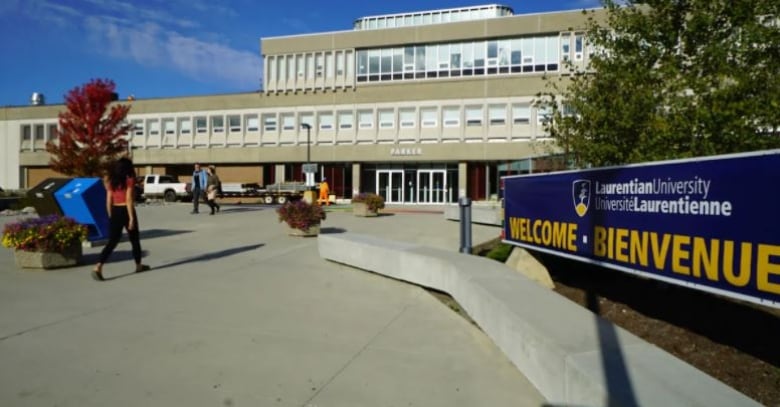 The pace of change at Laurentian University, which is in the midst of insolvency negotiations, is speeding up as termination notices for faculty and staff at the Sudbury, Ont., school are expected to go out today.

Radio-Canada has learned that more than 60 programs will be cut as part of the process.

The unions for faculty and staff are expected to ask members to vote on their respective tentative agreements on Tuesday.

Details of the job losses, and program cuts and reorganizations as well as contract negotiations have been kept strictly confidential under the court-mediated restructuring process.

Gyllian Phillips, past president of the Ontario Confederation of University Faculty Associations (OCUFA), said the university’s administration made a “tragic choice” by going through the Companies’ Creditors Arrangement Act (CCAA) process after declaring insolvency Feb. 1.

“It’s a failure of government in the long term to provide stable public funding for secondary post-secondary institutions, especially those in the North, who face some extra challenges,” she said. “But also it’s a failure in the short term.”

Phillips said the CCAA process was never intended to be used by a public-sector institution, so it’s hard to say whether it is unfolding as it should.

But she said the high degree of secrecy precludes the general public from weighing in what they would like to see happen to an institution grounded in the community.

She said asking faculty and staff members to vote on tentative agreements a day after learning whether they’ll have jobs under the restructuring plan creates a highly charged environment. Add to that a deadline of April 30, as cited by Laurentian’ president Robert Hache in letter on the university’s website, to have the labour agreements in place so restructuring can continue seems unreasonable, said Phillips

“The people are being asked to vote on something without actually knowing what the consequences would be if they voted against it, and to me, when so much is on the line, it sounds a lot like voting under duress.”

“I know that many members are worried. Their mental health has already deteriorated because of COVID-19, and our latest announcement of the stay-at-home order [that began Thursday] combined with not knowing what’s coming is really taking a hard toll on our members.”

Fenske said it’s been a challenge not being able to communicate with the 268 members of his union, which represents non-faculty positions, including lab technicians, managers and workers in the physical plant.

“You see people, you try to go for a walk in your neighbourhood, you see them and you don’t know what to say to them because you have been told that you’ll get in significant trouble if you do,” he said.

Fenske said the confidentiality order comes from the Chief Justice of Ontario, with warnings of fines or jail time for breaching that directive.

There’s also the issue of dealing with “aggressive conversations” daily as part of the CCAA process, he said.

“The insolvency lawyers, these are people that don’t respect that we are people. They look at us as dollars and cents. You know, I’m not Tom Fenske. I’m an FTE–  full-time employee.

“That’s what we’ve been reduced to.”

Katlyn Kotila, a political science and communications studies student at Laurentian, said her final week of classes was different than normal.

“Students, and professors and everyone involved are stressed and uncertain,” said Kotila. “And so it’s really difficult to go into exam season with hope and with the ability to really focus on our studies and to get through these final weeks because we can barely focus on what’s going on with the uncertainty looming over our heads.”

Kotila said she’s giving her professors “all the credit in the world” for trying their best.

“They’re trying their absolute best, but there’s not much help to give when they don’t know the answers either.”

Laurentian president Robert Haché has reassured students they’ll be able to complete their degrees through courses offered next year.

In a separate March 8 letter on the university’s website, Haché outlines the next steps, saying key elements of restructuring, such as labour agreements, need to be in place by April 30.

“That will allow us to further develop a meaningful financial forecast and engage in discussions with a view to obtaining additional financing for a post-restructuring Laurentian.”