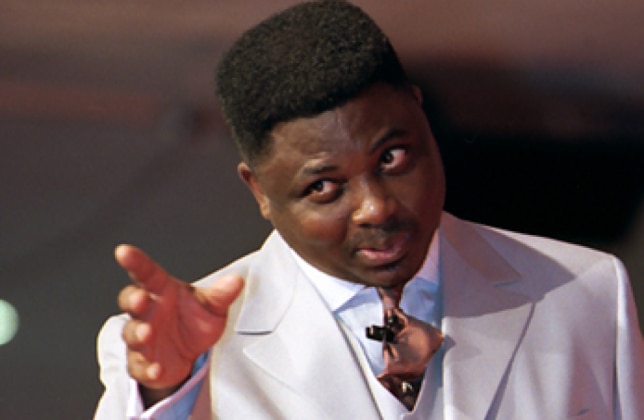 The Kingsway International Christian Centre pastor is facing serious accusations from a UK newspaper. Daddy Freeze has also weighed in.

Pastor Mathew Ashimolowo has been criticised by a UK newspaper for his lavish lifestyle.

The tabloid is accusing the pastor of making £6.3million-a-year through the members of his church, Kingsway International Christian Centre.

An investigation was carried out by the UK Sun and reported in an article titled “GOD DELUSION: Mega-rich pastors living in million pound homes prey on believers with claims of curing deadly diseases.”

It reads: “Pastor Ashimolowo’s church, Kingsway International Christian Centre (KICC) launched in 1992 from a rented hall has £16.4m in assets, £500,000 in the bank and rakes in more than £8m in revenue a year.”

“KICC — which mainly operates in Walthamstow and the recently-acquired ‘Prayer City’ building in Chatham, Kent — takes £6.3m a year from tithing, where the congregation gives up 10 percent of its salary.”

“But while claiming to ‘pass on his riches’ Ashimolowo — described as the church’s ‘founder, visionary and senior pastor’ — lives rent-free in a £1.1m nine-bedroom home in Romford, Essex, owned by the church.”

The preacher was also accused of using church money for birthday parties and other luxuries.

It read: “Ashimolowo has previously been found by the Charity Commission to have used church funds to pay for a £120,000 birthday party for himself at a London hotel, a £80,000 new Mercedes and a £13,000 Florida timeshare.

He was also paid around £50,000-a-year by the church for ‘pastoral services’ before the 2005 probe found he had flouted charity rules by being a trustee and paying himself a salary.”

Other accusations directed at Pastor Ashimolowo

The publication calls out the Nigerian preacher for his troubles with the law.

It said: “The Charity Commission found there had been ‘serious misconduct and mismanagement’ of charity funds and told it to establish itself as a new charity with new trustees — which it did.

“More than £500,000 was also legally paid by the church to his own private companies including Matthew Ashimolowo Media Ministries which publishes books and DVDs of his teachings.

“Accounts show the publishing company raked in more than £2 million — making a profit of £877,000 — between 1999 and 2005 before it started filing less detailed financial statements under Companies House rules.”

UK Sun also discusses Pastor Ashimolowo’s stance on tithing and wealth, while noting that the entire thing comes across as a ‘sales pitch.’

The Sun reporter named Richard Wheatstone who attended his service wrote, “The sermon, entitled ‘The Power of the Tithe’, listed 14 reasons why worshippers should donate 10 percent of their income to the church.

“Ashimolowo told the congregation: “If you do not pay the tithe, it is like you do not really trust God”. He labeled the money an “insurance against Satan” and warned of the dire consequences of non-payment.”

“The millionaire — estimated to be worth around £6 million by Forbes magazine in 2011 — says refusal to hand over hundreds of pounds a month will be seen by God as “disobedience” and result in it making “impossible for him to release your harvest”.

“He added: “Tithe is a good indicator of where your heart is”. Around 1,000 worshippers — who will be followed by a second congregation of the day just minutes later — fill out payment forms and place them into buckets passed along the aisles.”

The sun condemns another pastor

Another Nigerian pastor was mentioned in the article. His name is Alex Omokudu and his church is called Victorious Pentecostal Assembly (VPA).

It was launched three years after he moved to the UK from Nigeria in 2002. Like Ashimolowo, he was also accused of living off his members who give over £1million a year in donations.

play Newspaper also accuses Alex Omokudu, who says he is ‘heavily anointed with healing powers from God’ of swindling members

The Sun claims the 53-year-old pastor owns two properties, a £2million nine-bedroom mansion and a £600,000 property close to the first one.

The first property, located in leafy Hornchurch, Essex, has five reception rooms, a swimming pool, a sauna and a 250ft garden.

According to the publication, his church is filled with testimonies from the 5, 000 worshippers who are repeatedly told: “Give your money to God to get ahead of others”.

It reads: “Our reporter attended a service at VPA’s Barking church and joined thousands of people repeatedly told: “Give your money to God to get ahead of others”.

“The service started with a number of testimonies of people claiming to have experienced miracles after praying to ‘the God of VPA’ and requests from those looking for help. One teenager about to sit his A-level exams was told: “When you enter that exam hall, God will fill your head with the answers”.

“There is no excuse not to give your money to God… he sees any money you have coming. You cannot hide money from God. The church of VPA and Pastor Alex Omokudu will deliver you prosperity.”

“As the music built to a crescendo, direct debit forms emerged – and worshippers were told to come to the front and “pay your tithes”.

But while vowing to serve the congregation who hand over £1m-a-year, Omokudu also personally takes an annual £102,000 in rent for the church they worship in.”

Cool FM On-Air personality, Daddy Freeze, has reacted to this new report by the UK newspaper.

He did this via his social media accounts saying, “God has started to vindicate him on his stand about “yahoo pastors.”

“He was abusing YOYOS the other day, now there is an article about him and his excesses, abusing church funds, as investigated by a U.K. Magazine!

“Come and carry your tithe pastor o! Chai see as my God dey vindicate me steady! Exposing their confusion. Just Google ‘God Delusion mega rich pastors living in million pound homes’ be careful not to laugh yourself to death.”

Between Pastor Ashimolowo and Daddy Freeze

In 2017, these two had a face-off that started when the pastor lashed out at the OAP who has been preaching against tithes.

During a sermon, the preacher blasted Daddy Freeze by making reference to his failed marriage and calling him names.

He said: “Once and for all, let’s settle this matter on the power of the tithe. Some bunch of Yoyo somewhere should not determine what you pay.

Some guy who beats his wife throws her out, throws his children out of the house, broke his son’s knees, should not determine what we believe.

He drinks alcohol, sleeps with women and he’s trying to preach to preachers. He should just shut up because he is not qualified to speak on tithes.”

Daddy Freeze responded by sharing Biblical verses that support his no tithing campaign.

He said: “See the way he is defending tithing with so much passion; I hope this same passion is extended to bringing home our brothers who are currently enslaved in Libya. I didn’t hear ONE single bible verse, just sentiments, and emotions in this defense.

“Who is this ‘Yoyo’ now? Mention his name make we know am. And I hope there is proof to back these allegations up and they are not just ‘hearsay’ from a false interview conducted on an embattled pot of stale bitter leaf soup.

“Whoever the ‘yoyo’ is, one thing is certain, he cannot determine what the body of Christ believes, only the BIBLE can do that. So until you can come out with a superior argument to explain where Jesus, our high priest, or the disciples, our first pastors collected tithes, it looks like the ‘yoyo’ is the one speaking the biblical truth and no amount of subbing or name calling can override the scriptures…”

Daddy Freeze has been gaining a lot of attention for his #free the sheeple movement.

Daddy Freeze Pastor Humble Okoro invites OAP for deliverance in Abuja stadium
“No more tithing in my ministry”: Pastor says after listening to Daddy Freeze and doing further research
Christianity on Sex What does the Bible actually say about premarital sex? We look at nine bible verses concerning sexual relations before marriage.
Photos: Pastor Adeboye and wife attend annual Thanksgiving service with Governor Ambode at the state house
Fergie Recalls Crystal Meth Addiction: “I Was Hallucinating on a Daily Basis”
In China You get arrested for preaching the gospel This country is ranked 39 on Open Door USA’s World Watch List for countries suffering religious persecution.
‘I won’t lie, I have prayed for an enemy to die before’ – Daddy Freeze writes
Daddy Freeze OAP replies Pastor Ashimolowo over wife beating accusation
Photos: The Kano-based priest who quit Catholic Church recently got married? See his supposed wedding photos!
Bride-to-be is left heartbroken after another lady appears in church to claim she’s dating her partner (Photos)
Pope Francis calls for Lord’s Prayer to be altered
At least 20 people shot as gunman opens fires during church service n Texas
Chris Oyakhilome daughter &amp; boo are engaged!
We really love each other but our parents are being difficult