“No more tithing in my ministry”: Pastor says after listening to Daddy Freeze and doing further research 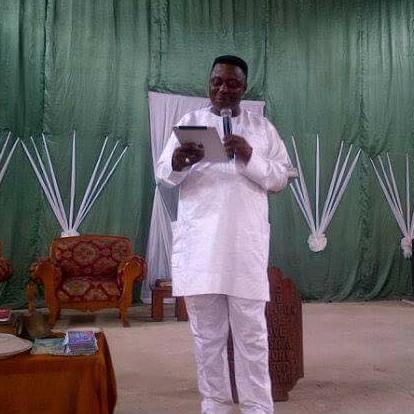 “No more tithing in my ministry”: Pastor says after listening to Daddy Freeze and doing further research

His Holiness, Prophet Ufuoma Bernard, the founder of The Godist Church has reportedly decided to scrap paying of tax in his church as a result of listening to Freeze’s teachings.

According to the report shared by a member of his congregation, the prophet said he is convinced Daddy freeze is right because he has looked through the bible and critically examined arguments for and against tithes and he believes paying of tithes is not biblical.

Chioma powers quoted Prophet Bernard: “After one month of pouring through the Bible and critically examining both sides of the arguments for and against TITHING, I publicly repent from receiving tithes. I am convinced Daddy Freeze is right. From henceforth, No more tithing in my ministry. – Pastor Ufuoma Bernard” 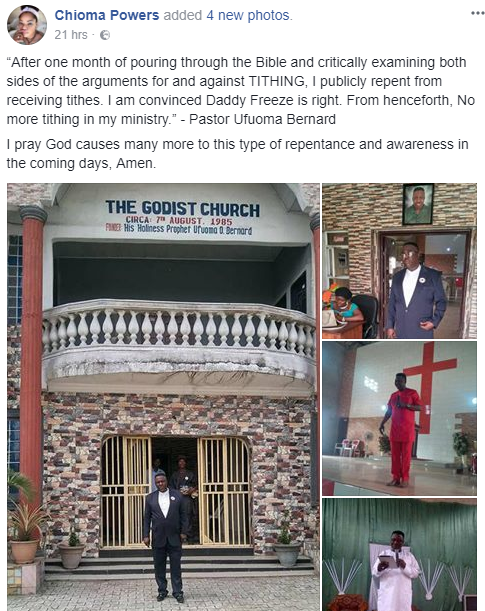 Freeze has rejoiced over the prophet’s decision and shared the news via his Instagram account with the caption: “Wow this gentleman actually has quite a big ministry… I’m proud of him! Lets all stand up for the truth!”

Former Minister of Foreign Affairs, Oluremi Adeniji, dies at 83
We really love each other but our parents are being difficult
Daddy Freeze OAP replies Pastor Ashimolowo over wife beating accusation
Daddy Freeze Pastor Humble Okoro invites OAP for deliverance in Abuja stadium
‘I won’t lie, I have prayed for an enemy to die before’ – Daddy Freeze writes
Study: 59% of People Haven’t Checked If the Equifax Breach Affected Them
In China You get arrested for preaching the gospel This country is ranked 39 on Open Door USA’s World Watch List for countries suffering religious persecution.
Monkeypox Virus now in 11 states The ministry of health’s spokesman, Mrs Boade Akinola made this known in a statement issued on Friday in Abuja.
‘I unapologetically believe in tithing’ – Gospel act, Nathaniel Bassey
At least 20 people shot as gunman opens fires during church service n Texas
Fergie Recalls Crystal Meth Addiction: “I Was Hallucinating on a Daily Basis”
President bans fresh recruitment into MDAs in 2018
Pope Francis calls for Lord’s Prayer to be altered
Christianity on Sex What does the Bible actually say about premarital sex? We look at nine bible verses concerning sexual relations before marriage.
Photos: The Kano-based priest who quit Catholic Church recently got married? See his supposed wedding photos!
Rwanda offers refuge to enslaved Libya migrants
Bride-to-be is left heartbroken after another lady appears in church to claim she’s dating her partner (Photos)