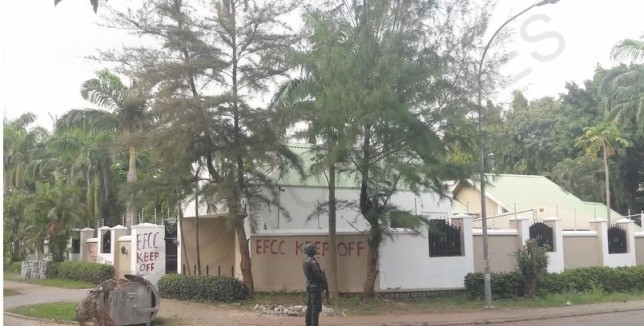 Abulrasheed Maina’s $2M property in Abuja has reportedly been taken over by EFCC.

An Abuja property valued at some $2M; belonging to former pension reform boss, Abdulrasheed Maina, has reportedly been placed under lock and key by operatives of the Economic and Financial Crimes Commission (EFCC).

Maina was dismissed by the Head of Service in 2013 and declared wanted by the EFCC after he was accused of cornering billions of Naira belonging to pensioners by the senate.

Maina fled the country after his dismissal and has been on the run since he was fired from the civil service.

However, in a strange twist, Premium Times blew his cover last weekend.

The online newspaper reported that Maina has returned as an employee of government in the ministry of interior.

Moments after his sack, Premium Times reports that  Maina’s No. 10 Hamisu Musa Road, Jabi, Abuja luxury home played host to “stern looking police officers giving cover to an operative in mufti who was marking the house in red.

“Another of Mr. Maina’s houses located at No. 12, Road 11, Kado Estate is also billed for similar exercise”.

The EFCC has been furious that Maina found his way back into the civil service via the Head of Service, even after he was declared wanted.

Maina, it appears, was hiding in plain sight.