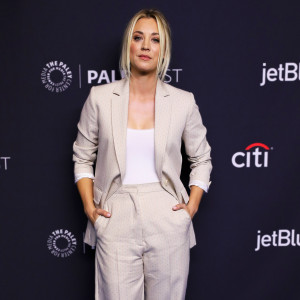 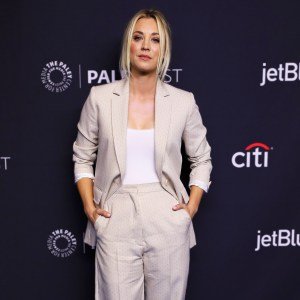 The Grinch came a little early this year! Kaley Cuoco referred to one of her dogs as “the Grinch” after the pup was spotted “aggressively” chewing up a Santa toy.

The Big Bang Theory actress, 33, posted a series of pet videos on her Instagram Stories on Saturday, December 1. “And then there’s Shirley, the Grinch who ate Santa. Aggressively,” she laughed in one of the videos, which showed the pit bull mix ripping into a doll in the shape of Kris Kringle.

“Shirley the grinch who’s eating Santa as we speak,” she captioned the footage.

This is the same canine that was pictured floating on a pool toy in the summer. “We are all just bystanders in Shirley’s world,” Cuoco wrote in a July 26 Instagram post. 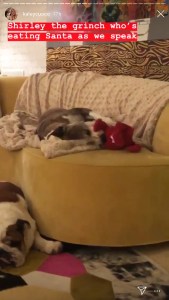 Along with her husband, Karl Cook, 27, Cuoco is the ultimate pet parent. After the pair met at a horse show in 2016, they immediately hit it off because of their mutual love for animals. “Must love dogs is No. 1,” she told Us Weekly of her requirements for any potential suitors. “He checked that off quite quickly.”

“We have been each other’s true other half since day one and we can’t wait to spend forever together,” the couple told Sidelines magazine in January shortly after their engagement in November 2017. “Dogs, horses and all!”

“So here’s what I’m grateful for … at my in-laws beautiful beach house, Karl and I came across a baby seal who was obviously lost and in pain,” the 8 Simple Rules alum captioned a video that showed the animal laying on rocks at sunset on November 22. “I called the 24 hour @cimwi___ (marine and wildlife hotline) and asked if someone could come help him. They promised me a volunteer but I was unsure it would happen since it’s Thanksgiving! A few hours later I noticed a group of volunteers huddled around the seal. They all showed up to help!!”

Alongside the happy-crying emoji, the Wedding Ringer star concluded: “my heart is full and I’m thankful these gracious people left their thanksgiving plans to help an animal in need. Doesn’t get better than that ♥️ ? ? @bricuoco”