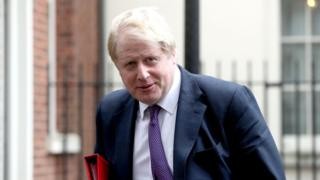 Boris Johnson is flying to Washington to urge Donald Trump not to scrap the international deal designed to prevent Iran acquiring nuclear weapons.

The UK and its European allies have until 12 May to persuade the US president to stick with the deal.

Mr Trump has strongly criticised the agreement, which he calls “insane”.

In a call with Theresa May on Saturday, the president “underscored his commitment to ensure that Iran never acquires a nuclear weapon”.

In the landmark deal – signed by the US, China, Russia, Germany, France, the UK and Iran – the latter agrees to limit its nuclear activities in return for the easing of sanctions on its economy.

European allies France, the UK and Germany all agree the current deal is the best way to stop Iran developing nuclear weapons and the UN also warned Mr Trump not to walk away from the deal.

But Mr Trump has threatened to withdraw unless the signatories agree to “fix the deal’s disastrous flaws”.

Ahead of the trip, Mr Johnson said the UK and US are “in lockstep” on many global foreign policy issues, citing the response to the use of chemical weapons in Syria and the Salisbury poisonings.

He added: “The UK, US and European partners are also united in our effort to tackle the kind of Iranian behaviour that makes the Middle East region less secure – its cyber activities, its support for groups like Hezbollah, and its dangerous missile programme, which is arming Houthi militias in Yemen.”

US Secretary of State Mike Pompeo said the documents were authentic and show the 2015 Iran nuclear deal was “built on lies”.

Mr Trump has until the deadline of 12 May to make a decision on the deal – the next deadline for waiving sanctions.

Earlier this month, Mr Johnson said it was important to keep the deal “while building on it in order to take account of the legitimate concerns of the US”.

Mr Johnson’s discussions are also expected to cover the crisis in Syria and also North Korea, ahead of Mr Trump’s meeting with Kim Jong-un, which now has a date and location arranged.