relationship are in trouble after the couple unfollowed each other on Instagram this week.

deleted each other’s photos from their social media pages.

The move by them came as a sh0ck to everyone, especially regarding

that they reportedly got married in a secret ceremony in Mercy’s hometown few weeks ago.

Shortly after the lovers parted ways, Ike went ahead to hangout with Mercy’s rival,

Tacha, on Christmas day although he was forced to delete the story as mercenaries stormed his page unapologetically.

While we are yet to uncover the mystery behind the disunion of Ike and Mercy,

a fan has alleged that Ike found out that Mercy sl*pt with Cubana Chief Priest, hence the reason for their split. 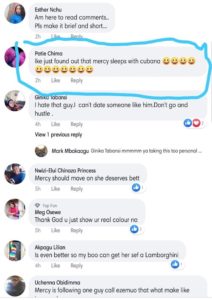