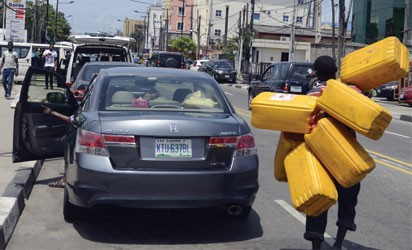 By Ediri Ejoh
OIL marketers, yesterday, blamed the Federal Government’s policies for the dwindling importation of petroleum products as well as low operations in the downstream sector of the petroleum industry.

This was their reaction to the impending mass sack of oil workers in the industry. 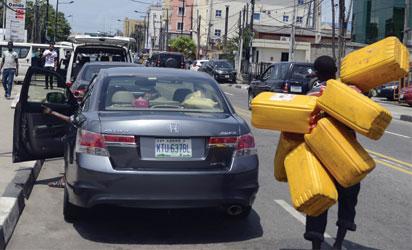 A man carries jerrycans to search for fuel in Lagos, on May 21, 2015. Long queues formed at petrol stations across oil-rich Nigeria on May 21 following a row over subsidy payment to petrol importers as well as sale of government oil blocks to private investors, union officials said. AFP PHOTO

Reacting to the development, a marketer who does not want his name in print, said: “Importation of Premium Motor Spirit, PMS, popularly known as petrol, has declined drastically. Before now, almost everybody was able to import and make profit.

‘’The major thing is the exchange rate because the oil industry deals with foreign exchange with banks which finance the business.

“Now that everybody is clamped down, we are restricted in buying from the banks. In the past, when you import, in the space of one week it is finished. Now, the whole thing is different.”

He, however, attributed the availability of petroleum products to the intervention of the Nigerian National Petroleum Corporation.

“NNPC normally imports the product and then gives allocation for import to flood the market. We have workers and filling stations trying very hard to get money and product,” he said.

A top management in one of the International Oil Companies, IOCs, who also reacted, but preferred to be anonymous, corroborated current competition and decline in the downstream business.

He said: “We cannot say for sure the level of competition statistically. But all we know is that there is massive decline in purchases of petroleum product by oil marketers.”

Meanwhile, oil marketers in the country have raised alarm over plans to embark on mass retrenchment of workers over the Federal Government failure to pay its outstanding debts owed on petroleum importation, accrued interest and exchange differential which runs over $2 billion to date.

In a communiqué issued by marketers and signed by their legal adviser, Patrick Etim Esq, it stated that many marketers and oil companies owed workers over eight months salaries.

“We currently owe the banks over $2 billion, which was taken as loans to import fuel, and because the government is yet to them or pay the banks interest on the loans as agreed, the interest accumulated over time and is still accruing.

“The government is in violation of the agreement reached with marketers on payment scheduled as many commercial banks who had lent money to oil marketers for the importation of premium motor spirit (PMS) are in despair following the weight of the mounting indebtedness from the oil marketers.”

“The hope that the outstanding debt owed marketers will be paid resulting from the intervention of the Vice President, Professor Yemi Osinbajo, appeared to be dashed as the payment that was promised to happen in July 2017 is yet to materialize. This was devastating to marketers as we are been dragged daily by banks on debts owe and under threat of putting our tank farms under receivership,” the communique read.