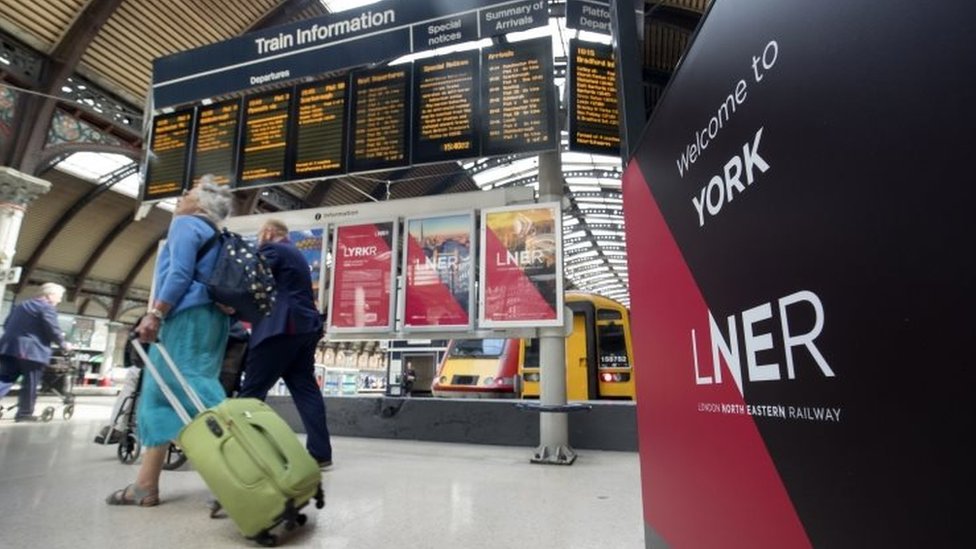 Rail services on the East Coast Main Line are back under government control, following the failure of the franchise.

Stagecoach and Virgin Trains, which had a 90% and 10% stake in the venture respectively, handed over control on Sunday after running it since 2015.

The Department for Transport will run the service until a new public-private partnership can be appointed in 2020.

The London to Edinburgh line connects London King’s Cross to stations in the north and Scotland.

The route – which services stations including York, Leeds, Newcastle, Aberdeen and Inverness – will now be known as the London North Eastern Railway (LNER), a name last used in the 1940s.

The first LNER train left Newcastle at 07:54 BST on Sunday and is due to arrive at London King’s Cross at 10:52.

The companies promised to pay £3.3bn to run the franchise until 2023, but at the end of last year it had become clear they were running into trouble.

In February it was announced that the franchise would end early, leading to accusations the government was bailing them out.

A history of failure

This is the third time a franchise on the East Coast Main Line has failed.

In 2005, GNER signed a £1.35bn, 10-year deal in what was then the biggest contract in European railway history. One year later it was stripped of the route.

In August 2007, National Express agreed a £1.4bn deal, but then handed it back to the government in 2009 amid the financial crisis.

It was then government-run until Stagecoach and Virgin’s £3.3bn bid in 2015.

Last month, Transport Secretary Chris Grayling said the franchise had failed because Stagecoach and Virgin Trains had “got their bid wrong”, overestimating the profitability of the line.

He told the House of Commons that Stagecoach and Virgin had lost almost £200m, but there had not been a loss to taxpayers “at this time”.

Mr Grayling has also rejected accusations from Labour and trade unions that his decision to end the deal early was a “bailout” worth £2bn.

“Stagecoach will be held to all of its contractual obligations in full,” he said.

The rail companies blamed their problems on Network Rail, saying it had failed to upgrade the line which would have allowed them to run more frequent services.

Virgin Trains East Coast (VTEC) managing director David Horne will be in the same role at LNER and all VTEC staff will transfer to the new franchise.

As a result of the change £8m will be spent on marketing, rebranding, IT systems and staffing, according to LNER.

A report from VTEC said the route had experienced a 5% growth in passenger numbers in recent months, building on the 21.8 million journeys taken in 2017/18, up 1.3 million from when the franchise began.

“The growth we’re now seeing proves our initiatives are paying off and the railway we hand over to LNER is not only better than we inherited, but one that has been positively transformed for customers,” he said.