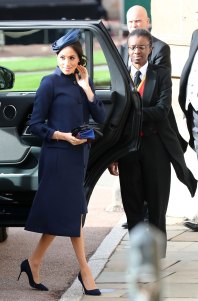 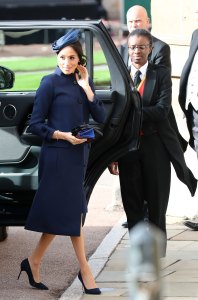 Royal watchers are buzzing with speculation that Duchess Meghan is pregnant.

The Suits alum, 37, sparked rumors with the outfit she selected to wear for Princess Eugenie and Jack Brooksbank’s wedding at Windsor Castle in England on Friday, October 12. Meghan stepped out in a navy dress by Clare Waight Keller (the same Givenchy designer who created her wedding gown), but she covered it up with a long, loose-fitting coat that she kept buttoned even while inside the church.

“Judging by the fact that she’s wearing a heavy coat indoors, Meghan Markle is either pregnant or the type to get chilly easily,” one Twitter user remarked. Another tweeted, “Something about Meghan’s outfit choice makes me think she’s pregnant and hiding a baby bump. It’s so conservative.”

This is not the first time in recent weeks that fans have wondered about a potential pregnancy. While attending the 100 Days to Peace Gala in London on September 6, Meghan wore a royal blue Jason Wu dress with ruffles over the stomach area. A Kensington Palace source blamed the rumors on “an unflattering dress and wind” at the time, telling Us that the former actress and her husband, Prince Harry, are focusing on “their official work … before starting a family.”

That said, Meghan and Harry, 34, do have children on their brains. A source reveals exclusively in the new issue of Us Weekly that the couple are “trying for a baby,” and both want “at least three kids.”

The Duke and Duchess of Sussex, who wed in May, are scheduled to arrive in Sydney, Australia, early next week for their first royal tour as husband and wife.