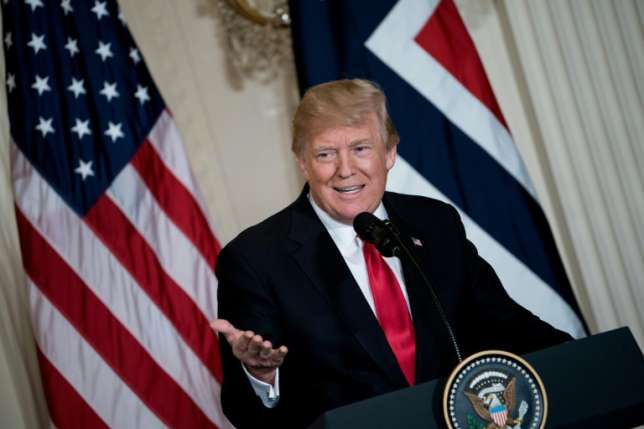 President Trump on Wednesday appeared to back off a commitment to meet investigators looking into Russia’s role in the 2016 US election, saying an interview was “unlikely” to take place.

President Donald Trump on Wednesday appeared to back off a commitment to meet investigators looking into Russia’s role in the 2016 US election, saying an interview was “unlikely” to take place.

Asked whether he would be willing to meet special counsel Robert Mueller, Trump deflected the question by repeatedly denying that investigators had found any evidence of collusion between his campaign team and Russia.

“I’ll see what happens. But when they have no collusion — and nobody has found any collusion at any level — it seems unlikely that you would even have an interview,” Trump said.

Trump had previously said he would be “100 percent” willing to meet Mueller, a former FBI director.

The 71-year-old president has strenuously denied that his campaign worked with Russia to undermine the campaign of Trump’s rival Hillary Clinton.

Two Trump campaign aides — including campaign manager Paul Manafort — have been indicted in the investigation.

Two more — including former White House national security advisor Michael Flynn — have pled guilty to lying to the FBI about their contacts with Kremlin-connected officials.

Appearing before Mueller would pose legal and political risks for Trump, who has often claimed that he is not personally under investigation.

Former president Bill Clinton‘s impeachment on counts of perjury and obstructing justice was fueled by misleading testimony he gave to prosecutors.

Mueller is also believed to be investigating whether Trump and his inner circle sought to obstruct justice, which has raised speculation that the president himself would be interviewed.

Trump had said he fired FBI director James Comey last year in part because of his earlier investigation into Russia and the 2016 election.

WikiLeaks deleted a tweet linking to the full text of the explosive book about the Trump White House
George Clooney gifted 14 of his closest friends $1 million each
The White House’s famous magnolia tree to be cut back
US tax bill: Republicans agree sweeping changes
Fusion co-founder: Dossier author feared Trump was being blackmailed
A reporter who met with the former spy behind the Trump-Russia dossier explains why it’s not ‘fake news’
TRUMP TO NORTH KOREA: My ‘nuclear button’ is bigger than yours
With their tax bill, Republicans prepare for a long-awaited win
Sydney was the hottest place on Earth on Sunday
Sydney man charged with being ‘economic agent’ for North Korea
Iran protests: Russia berates US for UN talks on ‘internal affair’
New York bombing suspect Akayed Ullah warned Trump on Facebook
Trump accuses China of allowing oil into North Korea
US ready for North Korea talks without preconditions, says Tillerson
White House Aide Omarosa resigns from the White House, to depart in January
McMaster: Potential for war with North Korea ‘increasing every day’
Fire and Fury: Trump says book is ‘fiction’ and author a ‘fraud’
Two former intelligence chiefs blast Trump over Russia comments
Ivanka Trump gets slammed for tweeting in support of Oprah’s rousing Golden Globes speech