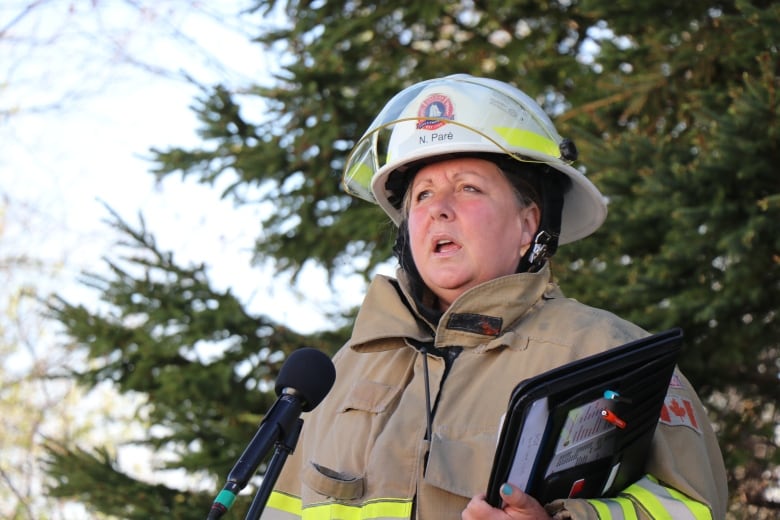 All crews have been pulled from the site of a brush fire in the Porters Lake area of Nova Scotia Saturday night, but Halifax Regional Fire and Emergency will leave a few engines on site as a precaution.

In an update just after 9 p.m. AT, district Chief Brad Connors said the people who were ordered to evacuate earlier Saturday will have to stay away.

Connors said 174 households in the area were asked to leave as crews battled the large brush fire east of Halifax. Whether they can go back home tomorrow will depend on the state of the fire, Connors said.

The fire is still considered out of control, Connors said, but because it’s night, “due to the atmosphere and the weather conditions, the fire will diminish quite substantially overnight.”

He said crews will be back first thing in the morning to put out hot spots and flare-ups.

Connors said Nova Scotia’s Department of Lands and Forestry will be in command of the fire on Sunday with the assistance of Halifax Fire.

Pascale Salvatore remembers the dramatic Porters Lake fire in June 2008, and she and her family were ready for the evacuation order when RCMP showed up at her door.

She was “a little bit” nervous to have to leave, Salvatore said, but they knew they needed to go.

Nadya-Lyse Paré, Halifax Fire assistant chief, said in an update at 5:30 p.m. AT that the smoke has gone down slightly, which was a “very good” sign. However, they would likely not be able to call it under control “for a while yet.”

As of 9 p.m., the fire had grown to 40 hectares, but no homes had been affected.

“The fire has not come closer than about half a kilometre to any houses, but we do have crews that are on standby in those areas just in case it gets near any home,” she said.

Houses south of that line were on standby.

Earlier in the day, both RCMP and Halifax Search and Rescue went door to door in the area to warn people of the evacuation order.

Jim Rudderham, acting manager for forest protection in Nova Scotia, said Lands and Forestry staff responded to the brush fire, which began just north of Highway 107, around 12:30 p.m. AT.

The fire then hopped across Highway 107 and headed south toward the Atlantic coast, but “there’s a lot of land in between there,” he said.

Paré said the situation would have been “quite dangerous,” but no one was in harm’s way at the time since the area was blocked off.

Highway 107 between exits 18 to 20 were closed much of Saturday due to the fire. Those roads will remain closed overnight.

Rudderham said the dry and windy conditions made fighting the blaze quite challenging, and they requested more resources.

Late Saturday afternoon, Rudderham said three helicopters from the Department of Lands and Forestry were helping pour water on the blaze. Fifteen provincial staff as well as crews from eight Halifax Fire detachments were on scene, he said.

People from HRM’s Emergency Management Office, RCMP, the Department of Transportation and Infrastructure Renewal and other supporting partners were also on the scene.

Area Coun. David Hendsbee said people are concerned “of course,” noting this is the third fire in the Porters Lake area in recent years.

In the 2008 blaze, the fire burned about 1,925 hectares through a wooded area between Lake Echo and Porters Lake and forced 5,000 people to leave their homes.

If the wind continues south, Hendsbee said, Saturday’s brush fire might follow the same woodland path and stay away from most homes in the communities of West Porters Lake and Mineville.

But if it shifts southeast or southwest, “we have a problem,” he said.

There was another small fire in West Porters Lake in 2016 when a home collapsed.

The Lake Echo Community Centre on Highway 7 has been set up as a comfort centre for evacuees to drop in for a hot drink, charge their devices and stay safe, Hendsbee said. It is closed overnight but will reopen at 8.a.m on Sunday for residents to check in again and receive updates on the fire.

If people need a place to stay overnight, the Red Cross can provide beds and further support, he said.

Environment Canada put out a special air quality statement just after 2 p.m. for those in Halifax Metro and Halifax County West due to smoke in the area.

This is the second large fire crews had to fight in Nova Scotia on Saturday.

A forest fire near Chester Grant, N.S., that erupted Friday evening covered about 27 hectares and razed at least two buildings.

Crews returned to the area at first light on Saturday to continue their work on the fire, which had slowed down to the point where there were no open flames and only hot spots were being put out.