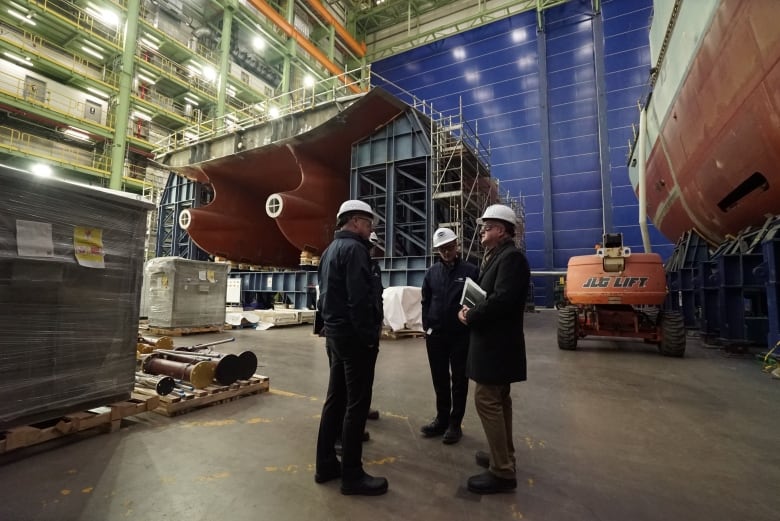 Canada’s new Arctic patrol ships could be tasked with hurricane relief, The Canadian navy will take possession of two Arctic Offshore Patrol Ships in the new year — and it looks like they’ll be spending as much time in the sunny south as they do in the Far North.

Vice-Admiral Art McDonald, the commander of the navy, told CBC News recently that military planners see the ships playing a role in delivering disaster relief in the Caribbean, where hurricanes have been increasing in size and destructive power.

“We can see a great opportunity to use this hurricane response as we go forward,” McDonald said in a year-end interview. “Ironically, the Arctic offshore patrol vessel will find itself equally spending its time between our Far North and down south in support of our securing the continent.”

The first of the long-awaited patrol ships, HMCS Harry DeWolf, conducted sea trials a few weeks ago under the supervision of its builder, Irving Shipbuilding of Halifax. It’s due to be handed over to the navy in the spring, McDonald said.

Some members of the ship’s inaugural crew took part in the shakedown to familiarize themselves with the new vessels.

“We’ve completed our training and we’re ready to take it,” McDonald said.

A second ship, HMCS Margaret Brooke, will be delivered to the navy in the fall.

Irving’s Halifax Shipyard originally was slated to deliver the Harry DeWolf in 2018, but the deadline was pushed ahead to the end of 2019 and then pushed again into 2020.

McDonald said there are always delays when the first ships in a new class of vessels are introduced and the navy is satisfied it will receive fully functional, capable ships.

“We know that the lessons learned from tackling those production challenges, they’re being folded into the second ship and into the third ship,” he said.

Major component blocks of the third ship are being assembled at the Halifax yard now, and company officials, speaking recently on background, said production has become exponentially more efficient since the completion of the second vessel.

Steel for the fourth ship is being cut and shaped.

The brainchild of the former Conservative government, the Arctic Offshore Patrol Ships originally were pitched 15 years ago as three armed heavy icebreakers for the Far North. That morphed into a plan — originally pegged at $3.1 billion —  to build eight light icebreakers. The number was cut to five (with the possible addition of a sixth) by the time the program got underway.

A little more than a year ago, the Liberal government confirmed it would build a sixth ship for the navy and construct two others for the Canadian Coast Guard.

Irving is the prime contractor for the navy’s new frigate program; some expressed concerns that the company would be stuck with a gap in production between the frigates and the patrol ships. The addition of the three new ships promised by the Liberals all but closes that construction gap, company officials acknowledged. It also added $800 million to the program’s revised $3.5 billion budget.

CBC News recently was given access to the Harry DeWolf as contractors completed last-minute work. Compared with previous Canadian warships, its cabins and work areas are spacious and high-tech.

McDonald said he believes the versatile design will make the ship useful, not only for sovereignty and security patrols, but also for research projects.