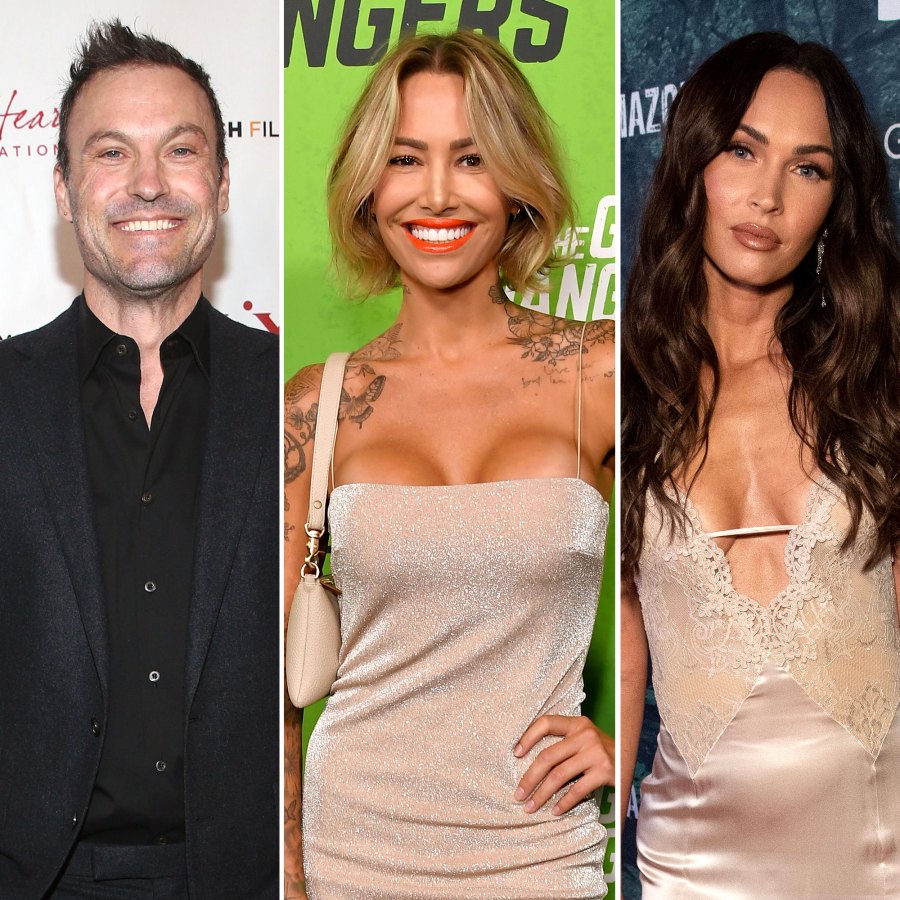 Ready to mingle? Brian Austin Green was spotted out in Los Angeles with Australian model Tina Louise more than one month after his split from Megan Fox.

The BH90210 alum, 46, and the Maxim model, 38, grabbed lunch at a local taco eatery on Tuesday, June 30. Photos obtained by the Daily Mail show Green dressed down in a white T-shirt and ripped jeans, with a face mask slung around his neck to protect himself amid the coronavirus pandemic. Louise, for her part, wore a formfitting black dress paired with black boots.

Green’s midday date came after he confirmed in May that he and Fox, 34, had called it quits after nearly 10 years of marriage. As the Transformers actress sparked romance rumors with Machine Gun Kelly, the Desperate Housewives star addressed the state of his relationship during an emotional episode of his “… With Brian Austin Green” podcast.

“I will always love her,” the California native said of his estranged wife, with whom he shares sons Noah, 7, Bodhi, 6, and Journey, 3. “And I know she will always love me and I know as far as a family what we have built is really cool and really special.”

While Green noted that he and the New Girl alum planned to “still do family vacations and holidays as a family and really make that a focus for the kids,” he acknowledged that “it sucks when life changes” unexpectedly. Fox had already been linked to Kelly, 30, before her breakup was officially announced — but Green reassured fans that the budding couple weren’t “villains” in his life.

Days after confirming his single status, a source revealed to Us Weekly exclusively that Green was “really not in a good place” and “devastated about the divorce.” A few weeks later, however, the Anger Management actor spurred speculation that he was moving on with Courtney Stodden when the pair were seen grabbing Mexican food together in Los Angeles. The 25-year-old model was later photographed sporting a hat from Green’s new Someone Make America Great (SMAG) line.

While the estranged couple appear primed to move on from their split, they’re still making their family a priority. On June 21, Green celebrated Father’s Day cuddling with his three boys and revealed that eldest son Kassius, whom he shares with ex-fiancée Vanessa Marcil, sent his love from afar. “My heart,” Green wrote via Instagram.

Listen to Us Weekly’s Hot Hollywood as each week the editors of Us break down the hottest entertainment news stories!