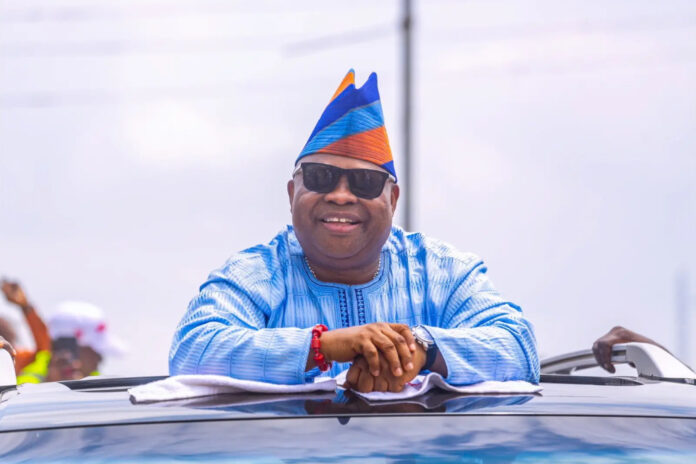 Senator Ademola Adeleke has been sworn-in as the sixth elected Governor of Osun State.

Adeleke of the Peoples Democratic Party (PDP) was sworn in today, Sunday, November 27, 2022, at the Osogbo City Stadium, Osogbo.

Adeleke became the Governor of Osun, after he was administered the oaths of allegiance and office by the State’s Chief Judge, Justice Oyebola Adepele-Ojo.
Also read; Biafra: Let Nnamdi Kanu’s Release Be Your Christmas Gift – HURIWA Charges Buhari

The swearing-in ceremony was attended by dignitaries, including the Presidential Candidate of the PDP and former Vice President, Atiku Abubakar, his wife, Titi, his running mate, Governor Ifeanyi Okowa, Governors of Akwa Ibom, Sokoto, Bayelsa States and the minority leader of the House of Representatives, Ndidi Elumelu.

It was also graced by traditional rulers led by the Ooni of Ife, Oba Adeyeye Enitan Ogunwusi.

Adeleke also reversed all appointments made by the immediate past governor, Adegboyega Oyetola, effective from July 7th, 2022.

Governor Adeleke ordered that all government bank accounts be frozen.

He also stated that all actions of the Oyetola administration from July 17th will be revisited.