Athletics at Marlins: Pitching Their Way Out of Murky Waters 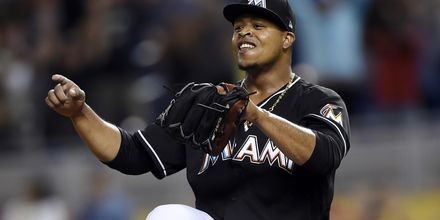 There are some new baby-A’s to gawk at and gush over, but the team on the field is still plenty capable of providing some excitement. The month of June has seen the A’s fall further out of the race, still, but it has also seen the beginning of the A’s long-overdue youth movement. Jaycob Brugman has been called up from Triple A to help bolster an A’s outfield that currently can either barely hit or barely field, or both, and the red-hot Matt Olson has forced himself onto the roster and has been getting more playing time lately. According to Susan Slusser, a talent like Matt Chapman could potentially be due for a callup before the end of the month to take over third base.

As the A’s travel from Tampa Bay to Miami for a second two-game series against the Marlins, the A’s red-hot offense will look to salvage the final two games of their current 1-3 road trip. However, as much as the offense has been warming up with the weather, in Miami the A’s are due to face some tough pitching and should be in for a hard-fought series.

The Astros are struggling by their team’s own lofty standards as the team has gone a mere 5-5 over their last ten games, and Texas has surged back into the one-game-below-.500 fracas that is the dogfight for second place in the division with a four game win streak. If Oakland’s youth movement can help establish some semblance of consistency on defense for this team, the A’s could easily jump into the fracas as well.

Miami has also been struggling to establish themselves within a division full of teams struggling just to make it back to the .500 mark, currently sitting in fourth place in the division with a 27-35 record, just a half game better than the A’s on the season. Following the last short series the Marlins played against the A’s, the Marlins caught fire, going 12-6 in the weeks following the two game set, primarily because the team’s young pitching staff, led by no-hitter throwing Edinson Volquez, was finally starting to perform better after a lot of early season growing pains. However, unfortunately for the Marlins, just as the pitching was starting to improve enough for the Marlins to win more consistently, the team’s top performing hitter in Justin Bour went down with an injury and will be sidelined for a little while.

Last time the A’s and Marlins met Edinson Volquez was having just a downright awful season, but he has turned his season around with authority over the last couple weeks. He has now won has last three starts after beginning the year 0-7, his middle start being the aforementioned no hitter, in which Volquez tossed a Maddux in addition to striking out ten and only walking two, and he will be taking the mound in the latter game of this series.

While he is still stealing bases like he’s always been able to, Dee Gordon hasn’t been getting on base at the rate people have long been accustomed to him reaching, with his OPS mired down below .680 on the year. In general, outside of the injured Justin Bour at first base, the entire Marlins infield has collectively struggled on offense.

The A’s have been hitting well but are running into Miami’s two best pitchers at the moment. In addition to Volquez’s hot streak, Urena is armed with a 96 MPH fastball and possesses the ability to control it and avoid walks. The A’s bats have a definite challenge ahead of them over the next two games.

Jharel Cotton has to starve off his walk problem otherwise the Marlins’ lineup will be able to take advantage. Cotton’s stuff has looked as good, if not better, than just about anyone else’s on the A’s starting pitching staff, but his control and deception, especially seemingly in the worst possible moments, has been lacking. Daniel Gossett making his major league debut will be particularly intriguing, as the righty had a rapid ascent up through the minors last season, and, after a month-long hiccup to start the year, has been showing the same dominance of minor league hitters again. Gossett’s specialty is his ability to avoid walks and induce weaker contact, so the A’s defense will have to be alert and on its best game to help out the rookie.