At Shimla police station set on fire, questions loom over a custodial death 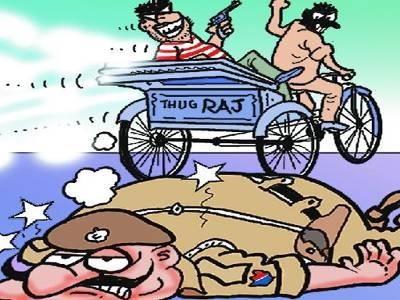 Behind the blackened facade of the two-storeyed Kotkhai police station, 60 km from Shimla, are several unanswered questions over a custodial death that triggered protests across the state. Several of these questions are being directed at the police force: where was the police station’s staff when the victim, Suraj Singh, 29, a Nepalese national and one of the six accused in the gangrape and murder of a 16-year-old schoolgirl, was attacked, allegedly by main accused Rajendra Singh alias Raju?

Didn’t any of them witness or hear Suraj being attacked? And why didn’t Subhash Singh Bisht, who shared the cell at the police station with Suraj and Raju, raise an alarm?

On July 19, a day after Suraj’s death, protesters set the police station on fire, alleging foul play and saying police were “protecting the real accused”.

The CBI, which was probing the gangrape case, is now also investigating the custodial death. The CBI has told the Superintendent of Police (Shimla) to “preserve the police station as crime scene” till they visit it along with forensic experts. Outside, 11 policemen stand guard, keeping out prying visitors. The solar panels on the sloping roof are charred, so are the electric fittings, furniture and documents inside.

According to the police’s version, a scuffle broke out between Raju and Suraj, during which Raju tortured him and banged his head on the cemented floor, leaving him dead by the time the guard noticed and called out to Station House Officer (SHO) Rajender Singh and others. Around 12.15 am, Suraj was taken to the government hospital at Kotkhai, where he was declared “brought dead”.

Sources told The Sunday Express that there were several reasons to question the police’s version.

The lock-up where Raju, Subhash and Suraj were kept is barely a metre away from the munshi’s (record keeper) room and less than five metres from where the SHO usually sits. The cell is right next to the entrance and faces the stairs leading up to the first floor. So it’s unlikely that Raju’s alleged attack, when it started around 11.30 pm, went unnoticed or unheard, even if all the personnel were on the first floor, the sources say.

“It’s hard to believe the police story because besides the usual staff and the new SHO, there was additional staff posted at the police station since the SIT was probing the gangrape case. Secondly, both Raju and Suraj were not hardened criminals with any past history or old rivalry. They were people who worked together on an apple orchard and had known each other well for at least five years,” said a former police officer.

Another question being asked now is, why didn’t Subhash, who was presumably in the same cell as Suraj and Raju when the incident happened, raise an alarm and call the duty guard or other policemen?

Sources in the police said that minutes before the incident, they had interrogated Subhash on the first floor of the police station.

On July 25, over a week after Suraj’s death, the CBI conducted a second post-mortem on his body. With much of the evidence in the police station feared to have been destroyed in the fire, much depends on the post-mortem report, said former Director General of Police, I D Bhandari.

“In cases of custodial deaths, the post-mortem report is a very strong evidence, even more than circumstantial evidence. The findings of the report will certainly lead to firm conclusions on whether his co-accused killed Suraj or if there is a police hand,” he said.