At least 1 dead, 1 missing after boat flips on Lake Winnipeg 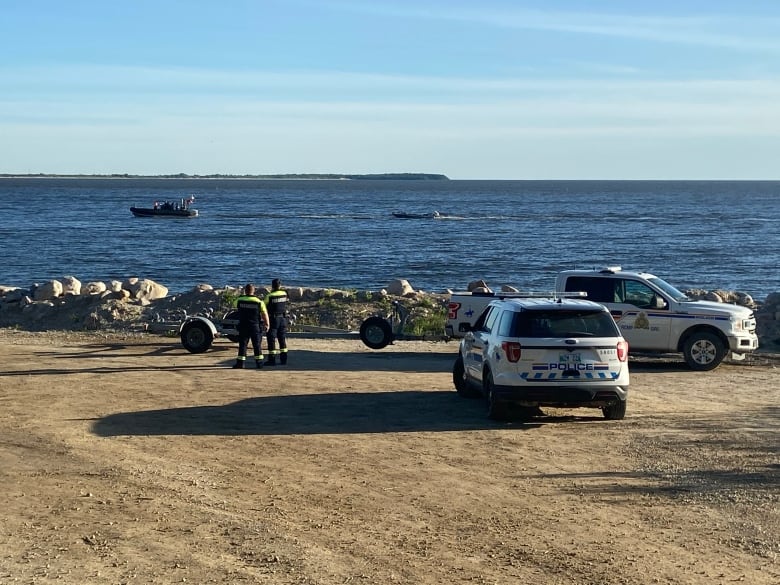 At least one person died and another was missing after a boat capsized on Lake Winnipeg at Bélair, Man., on Saturday.

STARS Air Ambulance spokesperson Fatima Khawaja confirmed multiple people were onboard the watercraft , a 5.1-metre skiff, when it flipped in the area off the east shore of the lake’s south basin.

It is unclear how many people were on the boat in total.

A CBC reporter saw one body loaded onto an ambulance, and sources at the scene said another person is missing.

In an email, RCMP Cpl. Julie Courchaine said a witness on the shore saw an overturned boat and people in the water. Police responded to the call shortly after 4:30 p.m. CT on Saturday.

Members of the Canadian military, Canadian Coast Guard, RCMP, fire and paramedics took part in the search and rescue operations.

At about 7:45 p.m., the capsized boat was towed to the launch, where several RCMP vehicles from Selkirk and Powerview were parked.

The boat launch is located at the bottom of Yellow Brick Road, a gravel road that meets Lake Winnipeg, where Saturday a flock of pelicans sat on the point to the south and a commercial fisher’s gillnet floated to the west.

More than a dozen family and friends arrived at the launch. Several sat on the breakwater and looked out at the lake as the search went on.

A Hercules military plane out of Winnipeg circled above, to the southwest of the boat ramp.

By dusk, most loved ones and searchers had left the boat ramp as the search wound down for the night.

Khawaja said the STARS crew landed and assessed the scene but did not transport any people from the area.

Courchaine said RCMP will have more information to release on Sunday.

The community of Bélair is located 91 kilometres northeast of Winnipeg, in the Rural Municipality of Alexander.