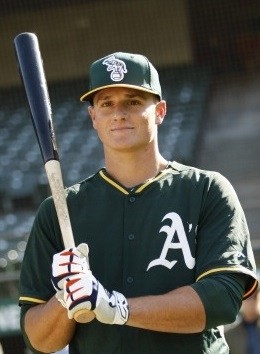 With the California League and the Midwest League All-Star breaks taking place earlier this week and all the minor league affiliates right around the halfway points of their seasons, it’s the perfect time to take a step back and determine who the true standouts on the field have been in the A’s system in the first half of 2017. And with that in mind, this week on my Athletics Farm site, I named A’s Farm’s 2017 Mid-Season Organizational All-Star Team.

Below you’ll find the primary starting players at each position for Triple-A Nashville, Double-A Midland, High-A Stockton and Class-A Beloit. Offensive players were selected from the primary starters at each position for each team, with notable players not leading in games played at a particular position listed in the designated hitter category. Starting pitchers for each club were selected from among the top starters for each team, while closers were selected from each team’s saves leader. Statistics listed are through games of Wednesday, June 21. And asterisks denote players with combined statistics from multiple minor league teams within the A’s system, but players’ major league statistics have not been included.

Outfielder Ryan LaMarre, who was recently released from the Nashville roster after being designated for assignment, is not included here since he is no longer in the A’s system. But Matt Chapman and Jaycob Brugman, who were recently promoted to the big leagues, are included since they were primary starters for Nashville and are still in the organization. Bruce Maxwell doesn’t appear here since, due to stints on the disabled list and with the A’s this season, he’s only started 19 games at catcher for Nashville this year. LHP A.J. Puk was recently promoted to Midland but spent most of his season with Stockton, while LHP Dalton Sawyer was recently promoted to Stockton but spent most of his season with Beloit, and RHP Corey Walter is currently with Nashville but made most of his starts with Midland and, consequently, all three pitchers are listed with the teams that they’ve made most of their appearances with this year.

Check out the list of All-Star candidates at each position. Then scroll just below the list of contenders to find A’s Farm’s winning Organizational All-Stars at each position. The winners were determined based purely on performance, not potential. Remember, we’re not selecting the top prospects here, we’re choosing the top performers on the field so far this season. So take a good look at the candidates for yourself and then feel free to chime in with your own thoughts…

(Stats through games of Wednesday, June 21)

(Stats through games of Wednesday, June 21)

Last year’s 3rd-round draft pick for the A’s has always been valued for his strong throwing arm and his solid work behind the plate, but he’s also shown plenty of pop at the plate this year. The 22-year-old is currently sporting the best slugging percentage at Stockton and is also tied for the team’s best batting average.

The A’s third overall draft pick in 2012 always has had plenty of power potential, but with some adjustments to his swing, he’s been wielding an even more potent bat this season. The 23-year-old is currently third in the Pacific Coast League home run race. He’s also the team leader in both walks and RBIs for Nashville, and is currently boasting a career-best batting average.

Acquired last summer from Washington for LHP Marc Rzepczynski, Schrock was the Nationals’ 13th-round draft pick in 2015. His ability to make contact has always been his greatest strength, and the 22-year-old currently has the third-best batting average in the A’s minor league system.

Widely considered the A’s top hitting prospect, the 21-year-old is also the youngest member of A’s Farm’s Organizational All-Star Team. Barreto has been a productive player this year while frequently batting in the leadoff spot for Nashville. He’s hardly had a day off for the Sounds and has more at-bats than any other A’s minor leaguer so far this season. Barreto’s also accumulated the second-most base hits in the system and leads his team in triples.

After performing well during his first couple of months at Triple-A, the A’s top draft pick in 2014 recently got the chance to make his major league debut with the A’s. While always respected for his strong throwing arm and his defensive prowess at the hot corner, the 24-year-old was also averaging a home run every 11 at-bats at Nashville this season and had the best slugging percentage among A’s minor leaguers prior to his promotion.

While making the move from third base to left field at Nashville this season, the 23-year-old has also managed to up his offensive output. The young slugger is currently tied for the league lead in home runs and also has more extra-base hits and total bases than any other A’s minor leaguer this season.

The A’s 17th-round draft pick back in 2013, the over-achieving outfielder recently got the opportunity to make his major league debut with the A’s. Prior to his promotion, the 25-year-old had the second-best on-base percentage among A’s minor leaguers and also boasted the best batting average among Sounds regulars.

Back for his second season in Midland, the slugging outfielder has been one of the RockHounds’ biggest run producers this year. The 25-year-old currently leads all A’s minor leaguers in doubles with 19 and is second in the system in RBIs, while also leading his team in total bases. He underwent surgery on his broken left hand this week and is expected to be sidelined for six to eight weeks.

While splitting time between shortstop and third base for the Snappers, the 21-year-old has emerged as one of the system’s top young sluggers this season while also improving his plate discipline. He’s currently tied for the team’s second-best on-base percentage while also boasting Beloit’s best OPS.

Last year’s 9th-round draft pick for the A’s has been the most consistently solid starter in the system this season. The 23-year-old has allowed more than 2 runs in a start just twice this year and has yet to allow more than 3 runs in any outing. He recently made his first start for Stockton and threw 5 2/3 scoreless frames for the Ports.

The righty has been a reliable relief arm for the RockHounds this season. Taken in the 6th round back in 2013, the 25-year-old has registered 27 strikeouts in 29 innings while compiling a 3.10 ERA and recording 8 saves for the RockHounds.